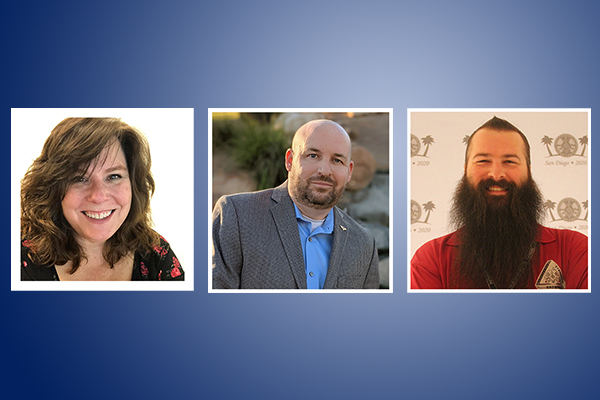 “I have no doubt that these three talented representatives will continue to do great things in their roles within the Western Territory and have a profound impact on the labor movement as a whole,” said IAM Western Territory General Vice President Gary R. Allen. “Sister Campbell and Brothers Shepherd and Van Wie all bring their own unique skillsets to the territory and will play a vital role in the future of our great Union.”

Campbell has been an active member in the IAM for more than 30 years. She initiated into Sky Harbor Lodge 2559 in May of 1989 and served in almost every capacity within the local and State Council. She served the local as Trustee, Recording Secretary, Vice President, Communicator, Educator and President. She also served on numerous committees including Organizing, Community Service, and the Women’s Committee.

While working at Southwest Airlines Campbell served as Shop Steward for 19 years and was active on the joint safety committee for more than two decades. As her involvement in the local grew, so did her activism outside the local. She began attending Arizona State Council of Machinists meetings quarterly. It was at State Council where Campbell received her greatest education – engaging with members outside of her own territory and understanding the labor movement as a whole. She served as Auditor, Trustee, Vice President, Secretary Treasurer, and President. She was the first female president of a State Council in the IAM, and the first from Transportation in Arizona.

Brother Shepherd studied business at Utah Valley University earning a degree and an early work history in accounting and economics. As a licensed pilot since 1999 and wanting a change from corporate accounting, he later pursued, and received a Bachelor’s in Aeronautics from the University of North Dakota.

Shepherd was introduced to the IAM while he was working as a service contract Air Traffic Controller/Flight Service Specialist at Lockheed Martin in Prescott, Arizona. In 2008-2009 the IAM ran a nationwide campaign and successfully organized all the Lockheed Martin AFSS Air Traffic Controllers. He had a front row seat to that 18-month campaign and, wanting to help his sisters and brothers find justice on the job, joined the IAM.

Shepherd was initiated in 2009 as a charter member of the newly formed IAM Local 2009 and selected as the first Local President. He was elected to the national negotiating committee as a Bargaining Representative where he remained for that first, and each follow-on CBA. He was also elected Chief Steward, a position he held until 2015. That year the Executive Council authorized and established a new Business Agency that merged the servicing of several smaller locals. Shepherd was selected as the President/Directing Business Representative (P/DBR) and Organizer of IAM Local 2009 which would later merge into IAM Local 519. He also serves as Vice-President on the Arizona State Council.

As P/DBR overseeing negotiations, servicing and organizing, Paul brings his professionalism, understanding of economics, negotiation acumen and expertise in Service Contract to the fight every day on behalf of the members of the unaffiliated local lodges throughout Arizona and Southern Nevada.

Brother Van Wie began his career serving in the U.S. Air Force as a Dedicated Crew Chief on the F-15 and F-22 airframes. Serving in subzero temperatures on the flight lines of Elmendorf, Alaska was a true test of will. While not working on jets, he served as the Head Trainer for the Base Honor Guard Team. He led the teams in delivering final burial honors for fallen service members.

After serving honorably in the Air Force, he started his career as a civilian mechanic working on military test aircraft for Pratt and Whitney at Edwards AFB in Southern California. This is where he was first introduced to the IAM. He quickly took on the role of steward and contract negotiator for his shop. There, Van Wie learned the true value of unionism and fighting for his sisters and brothers. In 2015, he was hired at District Lodge 725 as an Apprentice Organizer. There he applied the same principles he had learned early in his union career, fighting for workers in demanding dignity, equality, and respect in the workplace.

“These three talented individuals bring a wealth of knowledge, experience and leadership to the Western Territory and the IAM,” said IAM International President Robert Martinez Jr. “I’m excited have them on staff, and I look forward to seeing the results of their continued efforts on improving the lives of working families.”