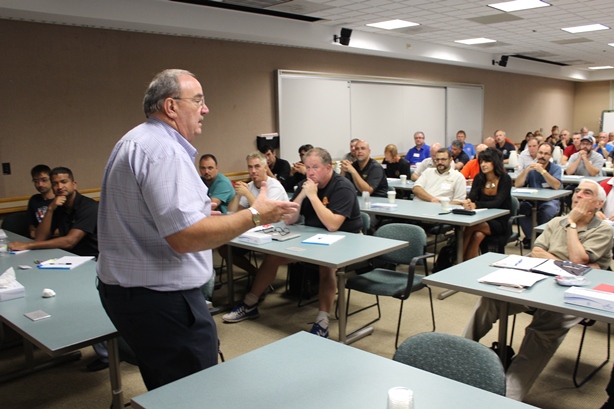 More than 90 delegates were on hand at the second annual Canadian Political Action Symposium this week at the William W. Winpisinger Education and Technology Center in Hollywood, MD.

“There’s nothing magical about political action,” said IAM Canadian General Vice President Dave Ritchie. “You have to be persistent and repeat your message over and over until the voters think of it as their own.”

“We’re building upon the foundation of our first symposium held last year,” said Grand Lodge Representative Gord Falconer. “We started from scratch last year and we’ve built up local political action committees across Canada. We’re motivating our membership to get involved politically and we’re hammering home the fact that their jobs are tied to politics.”

Reports from committees across Canada reveal that politics has indeed entered into the conversations on the shop floor like never before. Canadians go to the polls on October 19 to elect a new government.

Midway through the longest election campaign in Canadian history, there are indications that the New Democratic Party (NDP), currently the official opposition, could form the first majority socialist government.

“In the last federal election, 50 percent of unionized households in Canada did not exercise their right to vote and I find that shameful,” explained Ritchie. “If we want to end a decade of repressive Conservative rule, our members and other Canadian trade unionists must get out to vote. I have been a card carrying member of the NDP for 50 years and we have never been this close before.”

“We’re concentrating on four key issues in this election,” said Falconer. “Jobs, healthcare, childcare and retirement security are the concerns expressed most often in this election and the NDP has the answers Canadians are looking for.”

“I know people will be hearing this slogan a lot in the coming weeks,” said Ritchie. “Our time has come!”