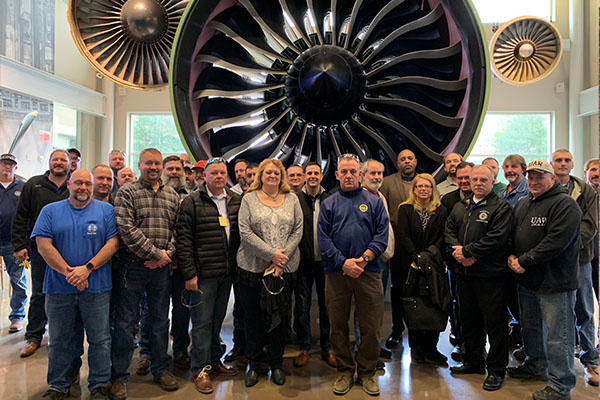 The General Electric Coordinated Bargaining Committee (CBC), a main table coalition of 11 unions including the IAM, recently met with GE company officials in Cincinnati, OH in a pre-negotiations benefits and business update.

Company representatives provided presentations and discussions on topics such as active healthcare, retirement income, and wages and overtime to include other related benefits.

In addition to the above benefits, GE overview and business updates were presented for aviation, healthcare and power sectors of the business.

In 2018 GE’s new CEO signed compensation package of up to $21 million a year in salary, bonuses, and stock for the next four years. In 2019 the CEO will receive an annual salary of $2.5 million, with a bonus of about $3.75 million along with equity awards valued at $15 million.

The GE lead negotiator stated that there is a long and proud history of working collaboratively together with our labor unions and have a history of successfully negotiating 14 contracts over the years along with a number of local contracts. CBC’s goal is to walk away with a contract that is fair to our employees.

Union CBC main table negotiators will be meeting April 16 and 17, 2019, in Dayton, OH to continue to prepare for the official start of negotiations in June 2019. The healthcare CBC subcommittee will be meeting on April 10-12, 2019 for continued work on the proposals.