CEO Salaries: More for Them, Less for Us 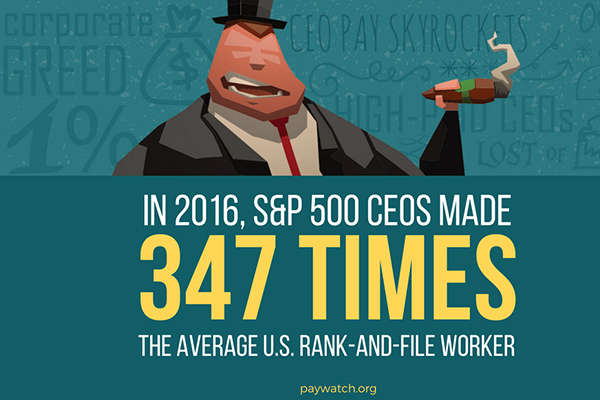 Last year, CEOs of S&P 500 Index companies took home an average of over $13 million in total compensation, according to the AFL-CIO’s analysis of available data.

Check out the highest-paid CEOs and their companies.

Adding insult to hard-working families is the fact that chief executives and their corporations continue to avoid paying a fair share of taxes. By reinvesting much of their profit overseas, they can forever defer paying federal income taxes.

Avoiding corporate income taxes is one way CEOs boost their companies’ profits and thereby increase their own pay. This corporate tax avoidance reduces the amount of money that is available for public goods like roads and schools. As a result, our economy increasingly has become out of balance.

Seven years ago, Congress passed a law that included a rule requiring all publicly traded companies to disclose their CEO-to-worker pay ratio. But Wall Street and big corporations have lobbied hard to stop the U.S. Securities and Exchange Commission from enforcing this rule.

It’s time we fight to change that.