Cervantes to be Next IAM General Secretary-Treasurer 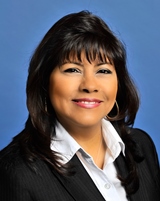 Cervantes has served as General Vice President in the GST Department since July 2013. She is the first Hispanic woman to serve on the Executive Council and will be the first female General Secretary-Treasurer in IAM history. Cervantes initiated into Local 2198 in Houston in 1989 as a Reservations Agent for Southwest Airlines. She held many positions in her Local, District 142 and on staff in the Transportation Department before GST Roach selected her to serve as Assistant Secretary to the GST in 2012.

“I would like to thank General Secretary Robert Roach, Jr. and the Executive Council for this tremendous opportunity to serve our great union and its members,” Cervantes said following the announcement. “I would also like to thank all the Sisters in our union for their support and guidance throughout my career and my family for the many sacrifices they have made on my behalf. I look forward to taking on the many responsibilities of the job of General Secretary-Treasurer, keeping our union strong and helping more of our IAM Sisters take on greater roles in our union.”

“I’ve known and worked with Dora Cervantes for more than 25 years,” said General Secretary-Treasurer Robert Roach Jr. “Dora is the right person at the right time to help lead this union into the future. The IAM and its members will be in good hands as Dora continues the hard work of keeping our union financially sound and a leading voice for working families around the world.”