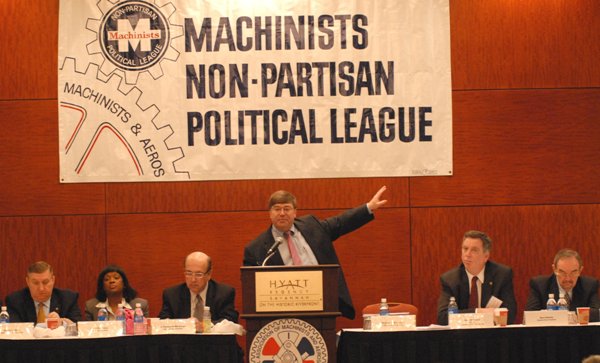 Members of the 2010 MNPL National Planning Committee meeting in Savannah, GA, welcomed the opportunity this week to ask questions and share insights with Charlie Cook, one of the nation’s most highly regarded political analysts and odds makers.

Cook, who edits the Cook Political Report and is regularly featured on national news programs, was characteristically blunt about the prospects for incumbents in the upcoming mid-term elections. “I don’t think the Democrats will lose their majority in the Senate,” opined Cook, who also said it was very hard to come up with a scenario where the Democrats do not lose control of the House of Representatives.

Setting aside the conventional wisdom that says the party in power nearly always loses seats in the first year after gaining power, Cook warned of an unconventional shift in power similar to the changes that took place during mid-term elections in 1994 and 2006.

“In August of 2009, when unemployment topped nine percent for the third month in a row, there should have been a “Houston we have a problem” moment at the White House,” said Cook. “The public wanted a president and congress that was focused like a laser beam on the economy.”

Responding to questions about how the Democrats might reverse such grim prospects, Cook suggested that a sudden and significant drop in unemployment would help. “That could happen,” said Cook dryly, “and I could be thin by November.”

While Cook’s message was not encouraging for Democrats, he was equally hard on Republicans and their efforts to ride the national wave of discontent and fear. “If Republicans nominate a bunch of whack jobs in the primaries, the GOP could conceivably snatch defeat from the jaws of victory,” said Cook. “The Democrats may have made mistakes and some may even deserve to be thrown out, but the Republicans have done absolutely nothing to be thrown in.”

In closing, Cook responded to a question about the likelihood of former Alaska Governor Sarah Palin running for president in 2012. “I think she wants to run and may even run, but I don’t think there’s a chance in the world that she would get the nomination,” said Cook. “The Democrats should be so lucky.”

MNPL Planning Committee members also heard from AFL-CIO Political Director Karen Ackerman, who cited the election debacle in Massachusetts as a painful example of what can happen when the labor movement fails to execute its member to member education program.

Delegates at the meeting responded with enthusiasm to remarks by U.S. Business & Industry Council Senior Research Fellow Alan Tonelson, who spoke about trade policies and the ongoing lack of export controls that continue to suck the manufacturing lifeblood out of our economy. “The only way out of this trap is to start producing more and replacing the stuff we buy abroad with stuff we produce here,” said Tonelson, who blamed “financial gimmickry and free market extremism” for the millions of manufacturing jobs and thousands of businesses that have been lost over the past decade.