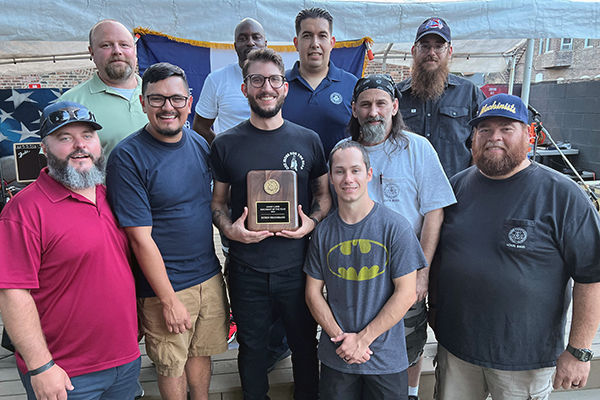 Executive board members voted earlier this year to move their annual membership solidarity event from the holiday season in December to the summer months; and this decision turned out to be a big success.

“We are a smaller local and we just never had a good turnout for our annual event,” said IAM Local 2600 President Mark Barco. “We want to make sure we are being responsible with our local funds and giving back to the members through our event as much as possible. Holding our annual membership event this summer was a huge success. This event had the largest turnout of any membership event in the last several years.”

This year, the board also voted to honor a member, Derek Rieckmann, who has exemplified service to other members, leadership on the job and solidarity within the local.

“Derek is a lead machinist and has stepped up in his role when working with new hires; guiding and training them in the best way possible,” said IAM Local 2600 Financial Secretary Mike Reilly. “Even though he is not an officer, he takes charge when need be if there are not any officers on shift. He also took the initiative to research parts for the new Siemens locomotive fleet. He created a list with part numbers and procedures for preventative maintenance on the new locomotives, printed it out and posted it in the foreman’s office.”

In addition to Machinist families, union members of other crafts in the shop were invited to join the event. Mike Gallardo, a SMART (International Association of Sheet Metal, Air, Rail and Transportation Workers) union member in attendance at the event, said he appreciates all the work IAM members have done in the shop to bring solidarity among all of the crafts.

Gallardo emphasized that it is important to bring all union members together, regardless of what their craft and union, because, at the end of the day, they are all working side by side, and fighting for the same things – fair compensation in wages and benefits, and safety and dignity on the job. Events such as these help to strengthen that bond and help all unions stand together and have each other’s backs in the workplace.

“It was great seeing the solidarity amongst our membership and rail labor, which is stronger now than ever,” said Josh Hartford, IAM Special Assistant to the International President for the IAM Rail Division. “We’re so thankful to IAM Local 2600 for holding this tremendous event for the membership to benefit Guide Dogs of America.”

“I think the event was phenomenal and it was great that we were able to contribute to Guide Dogs of America as well,” said IAM Local 2600 Vice President Robert Mendez. “I definitely look forward to doing it again next year.”