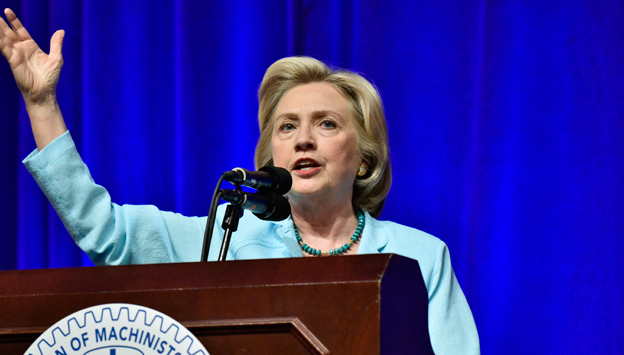 IAM-endorsed presidential candidate Hillary Clinton came away with a clean sweep of all five Democratic primaries held Tuesday, March 15. Victories in Missouri, Illinois, Florida, Ohio and North Carolina put Clinton even further on her path toward the Democratic nomination.

“Good paying jobs are the ticket to the middle class and we’re going to stand up for the American middle class again,” Clinton told a crowd of supporters Tuesday after results were announced. “We’re going to stand up for American workers, and make sure no one takes advantage of us, not China, not Wall Street and not overpaid corporate executives.”

Her “Super Tuesday Sequel” comes as Clinton, an honorary IAM Sister, is making a strong case for an economy that works for American workers. Her “new bargain” to revitalize U.S. manufacturing is built on corporations doing right by their communities, employers treating workers like assets instead of costs and government investing in sources of future good jobs.

READ: Why Hillary Clinton is the Best Choice for U.S. Manufacturing Workers

While coming out against the job-killing Trans-Pacific Partnership, Clinton has kept up steady support for the U.S. Export-Import Bank and federal defense funding that sustains thousands of IAM jobs in the aerospace and defense industries.

READ: Only One Presidential Candidate is Standing Up for IAM Jobs, Ex-Im Bank

“We’re finally at a point where we can all rise together,” former President Bill Clinton told Machinists at IAM District 9 in Bridgeton, MO just days before the primary. “We have to elect a president that will allow us to rise together.”

Will you make your voice heard? Go to USA.gov to register to vote today.