Connecticut Local 62A on Strike for Fairness at UTC 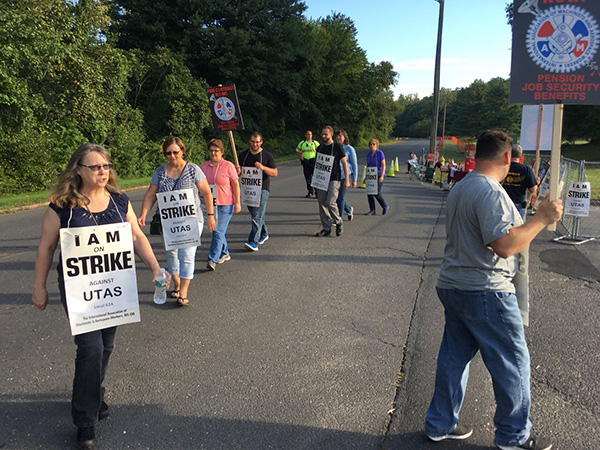 About 200 members of IAM Local 62A(District 26) at United Technologies Corp., in Cheshire, CT are striking for a fair contract.

Pay at the plant is among the lowest for UTC aerospace plants, said IAM Local 62A President Mary White. The company also failed to budge on its proposal to raise health insurance costs.

Members have been receiving support from the Connecticut State Council of Machinists, IAM Eastern Territory and other IAM members. Several elected officials and political candidates stopped by the strike line to show solidarity.

“These members deserve a fair contract,” said IAM Eastern Territory GVP Jimmy Conigliaro Sr. “They’ve earned it through their dedication, and hard work to ensure that  UTC is successful. The Eastern Territory supports them in their fight to share in the success they helped build.”

“Many of the workers at the ratification saw that their pay would actually go down if the agreement was approved,” said IAM District 26 Business Representative Mike Stone. “The Negotiating Committee remains ready, and willing to return to the bargaining table, until then these workers are prepared to strike as long as necessary to get a deal.”

UTC is in the final stages of a $30 billion merger with avionics manufacturer Rockwell Collins.

“This company had a profit of $2.4 billion last year and recently made out like a bandit with the recent corporate tax cuts,” said IAM International President Bob Martinez. “Our members at Local 62A are responsible for the success of UTC and they deserve to be treated fairly at the negotiating table. The IAM will fight to ensure that the members of Local 62A get the dignity and respect they deserve.”