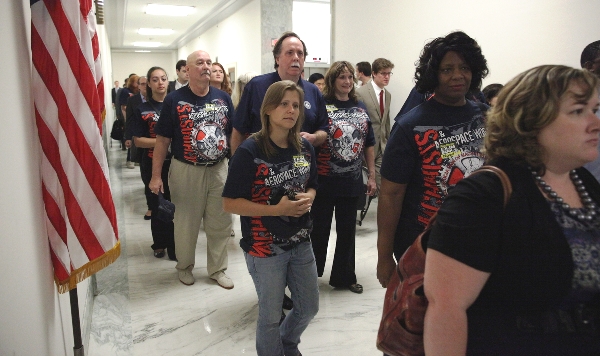 IAM members converged on a recent hearing on Capitol Hill to show their support for full reauthorization of the Ex-Im Bank and the protection of more than 200,000 American jobs. (Photos by Rick Reinhard)

House Finance Service Committee Chairman Jeb Hensarling (R-TX) and his right-wing extremist allies continued their assault on the Export-Import (Ex-Im) Bank at a recent hearing on Capitol Hill, setting off testy exchanges between a bipartisan group who supports the bank and hard-right conservatives who would like to see its death.

Click here to watch a Machinists News Network video about the hearing.

Hensarling has turned reauthorization of the independent credit agency, which expires September 30, into a political spectacle – even though the bank supports over 200,000 American jobs, mostly in manufacturing, and returned over $1 billion to the U.S. Treasury in 2013. The Ex-Im Bank provides financing for foreign customers buying American-made products, like Boeing airplanes and John Deere tractors.

“Those of you who are aggressively seeking reforms, which may or may not allow the continued existence of Ex-Im in any kind of a meaningful way, are playing with fire,” said Rep. Denny Heck (D-WA).

Foreign competitors, including China, Germany, France and India, have federal credit agencies up to four times the size of the U.S. Ex-Im Bank. Getting rid of the credit agency would put U.S. manufacturing, especially in the aerospace industry, at a severe competitive disadvantage.

Heck recently announced he will introduce legislation to reauthorize the Ex-Im Bank until 2021 and extend its lending cap by $5 billion each year. House Minority Leader Nancy Pelosi (D-CA) and Rep. Steny Hoyer (D-MD) have already thrown their support behind the “Protect American Jobs and Exports Act.”

“On a level playing field, American workers and businesses have no equal in the world,” said Pelosi. “The Export-Import Bank helps American firms compete against foreign companies with foreign backing, expanding the market for American products and creating jobs here in America.”

Some House Republicans are also balking at Hensarling’s attempt to shutter the Ex-Im Bank.

“I believe that there’s enough good about this bank, that we can use it for the good of our people, our country, and our industries,” said Rep. Blaine Luetkemeyer (R-MO).

Take action today – click here to tell your House Representative that you support a full reauthorization of the Ex-Im Bank.