HAPPY FRIDAY AND WELCOME TO MACHINISTS ON THE HILL,
a twice-monthly roundup of legislative advocacy on behalf of IAM members.

WE ENDED THE “CADILLAC” HEALTH CARE TAX: After years of fighting to end a 40 percent tax on many employer-sponsored health care plans, the IAM has succeeded in repealing the so-called “Cadillac” tax once and for all. Heading the IAM’s call, both the House and Senate voted in overwhelmingly bipartisan fashion to end the tax, before the president signed it into law on Dec. 20, 2019.

BIG WIN FOR DEFENSE FUNDING: The IAM succeeded in passing a $738 billion defense funding deal, which would boost spending for planes, ships, submarines and other defense products built by IAM members. The National Defense Authorization Act (NDAA) allows the Pentagon to buy as many as 90 F-35s and includes a provision to give federal workers 12 weeks of paid parental leave.
o   READ: Procurement highlights by defense program

USMCA WON’T STOP OUTSOURCING: The IAM is strongly objecting to the United States-Mexico-Canada Agreement, or NAFTA 2.0. The deal omits outsourcing protections for important sectors like aerospace and general manufacturing and leaves out enforcement mechanisms for labor rights in Mexico. The House passed the USMCA on Dec. 19, 2019. The deal cleared a Senate committee on Jan. 7 and is now in line for a full Senate floor vote. 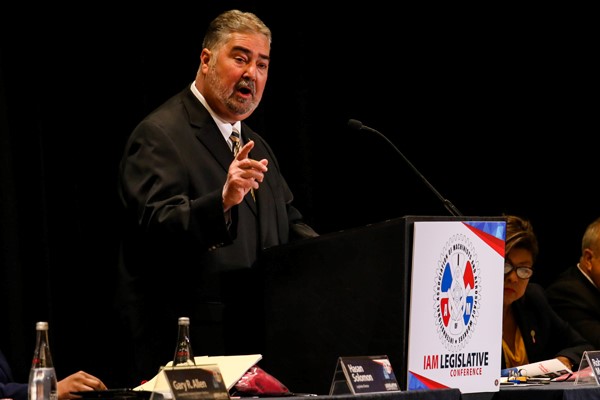 QUOTABLE: “For IAM members, it is cold comfort to say that this agreement is better than the original NAFTA, especially given the low standard NAFTA set. The question that must be asked is whether the newly revised NAFTA will curtail the outsourcing of work to Mexico. The simple answer to this question is no.” – IAM International President Robert Martinez Jr. in a letter to U.S. House of Representatives

RETIREMENT SECURITY: Multi-employer pensions are under attack from a proposal by U.S. Sens. Chuck Grassley (R-IA) and Lamar Alexander (R-TN) that would radically raise taxes on retiree pension benefits and health plans. In letters to both the House and Senate, the IAM has instead advocated for the Butch Lewis Act, which would protect the earned benefits of retirees, workers, and their families.
o   TAKE ACTION: Tell your Senator to support the Butch Lewis Act

WE SAVED THE EX-IM BANK: At the IAM’s urging, the House and Senate finally voted to reauthorize the Export-Import Bank, a critical financing agency that supports IAM aerospace and manufacturing jobs. After being hamstrung by hard-line conservatives for years, the bank now has a quorum and has the ability to fund large-scale export sales.

BUY AMERICAN: We continue to work with members of the U.S. House and Senate to include 100 percent “Buy American” for all defense spending. The IAM is teaming with U.S. Rep. Donald Norcross (D-NJ) to increase the Buy American requirement on defense spending and raise the cost differential for waivers.

SAVING AMTRAK: TCU-IAM National Vice President Jack Dinsdale testified before a U.S. House subcommittee to call out a “systematic campaign of union busting” at Amtrak. Dinsdale laid out how Amtrak is outsourcing good, skilled jobs of dedicated career employees to low-wage contractors with little to no experience; doing everything it can to reduce the internal, unionized headcounts, and giving false pretenses to Congress and the general public about its actions.

BACK PAY FOR FEDERAL CONTRACT WORKERS: The IAM urged the Senate to include back pay in the 2020 spending bill for federal contractors who lost wages during the longest government shutdown in U.S. history. Unfortunately, Senate GOP leadership blocked the inclusion of the IAM’s provision. Together with U.S. Reps. Mark Pocan (D-WI), Donald Norcross (D-NJ), Ayanna Pressley (D-MA), Pramila Jayapal (D-WA) and Eleanor Holmes Norton (D-DC), the IAM will continue to urge Congress to provide back pay for federal contractors.

PASS THE PRO ACT: The IAM is advocating for the PRO Act (H.R. 2474), which would broaden workers’ rights to strike and organize. The bill, introduced in May by House Education and Labor Chairman Bobby Scott (D-VA), was approved in committee and now the IAM is pushing for a full House floor vote.