The Healthcare Bill is Even Worse Than We Thought 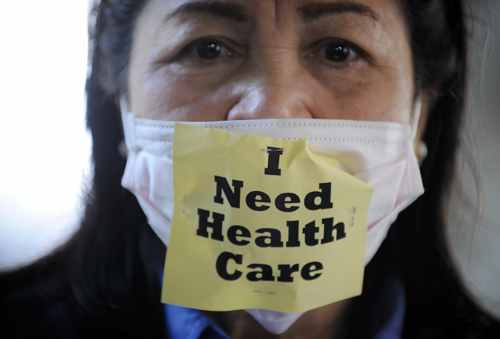 Twenty-four million people would lose health coverage in the next decade under the GOP’s attempt to repeal the Affordable Care Act, the non-partisan Congressional Budget Office reported Monday.

In January, President Trump promised to replace the ACA with a plan that provided “insurance for everybody.”

Fourteen million people would lose insurance in the next year alone, the report says. Premiums would be increased by an average of 15 to 20 percent, with older Americans paying “substantially more.”

The plan, known as the American Health Care Act, greatly curtails Medicaid expansion and scraps the requirement for employers with more than 50 employees to provide health insurance to full-time employees. In return, the wealthiest 2 percent of Americans will save $275 billion in taxes over the next 10 years.

The bill repeals the increase in the Medicare payroll tax for high earners, reducing the solvency of the Medicare Trust Fund by four years, to 2025 from 2029. People in their 50s and 60s could see premiums rise by $2,000 to $3,000 per year, according to the AARP.

“This bill will make Americans sicker and poorer,” said Richard Fiesta, Executive Director of the Alliance for Retired Americans. “President Trump promised to replace the ACA with a plan that expanded health care coverage at a lower cost. This plan does neither but rather provides the wealthiest Americans and insurance corporations with enormous tax cuts.”

The plan has already cleared two House committees and GOP leadership hopes to move the “repeal and replace” bills quickly.

Tell your Representative to scrap this attack on our health care. Call the Capitol Switchboard at 202-224-3121.