JOIN THE FIGHT AT THE 2020 IAM LEGISLATIVE CONFERENCE: The IAM will be gathering from May 4-6, 2020 in Washington, DC to fight for policies that actually benefit working people and their families. Attendees will hear from our allies on Capitol Hill and lobby on the issues that affect IAM members, such as trade, defense funding, retirement security, health care costs and more. The deadline to register is Friday, March 27.

DEFENDING UNION RIGHTS AT DOD: The IAM, NFFE-IAM Federal District 1 and our federal partners are fighting back against a cowardly White House memo that extorts national security law in order to strip the lawful rights of federal workers. The memo, without justification, gives the U.S. Defense Secretary the authority to dissolve DOD unions for alleged national security reasons.

The Federal Workers Alliance, of which NFFE-IAM Federal District 1 serves as co-chair, has appealed to Congress to reverse the misuse of authority and a legal strategy is being developed. No DOD locals have been affected yet.

“Using the coverage of ‘national security’ insults workers who have given their lives working for the DOD,” wrote IAM International President Robert Martinez Jr. in a letter to members of the U.S. House of Representatives.

DON’T USE DEFENSE FUNDING TO PAY FOR THE WALL: The IAM is adamantly opposed to the Trump administration’s request to take $3.8 billion from vitally important aerospace defense programs and instead use the money to build a border wall between the U.S. and Mexico.

Specifically, the president is proposing to take funding away from the F-35, C-130J, P-8A and Light Attack Aircraft programs, all of which are vitally important to the livelihoods of IAM members. The IAM will work with its allies in Congress to fight against this misguided request 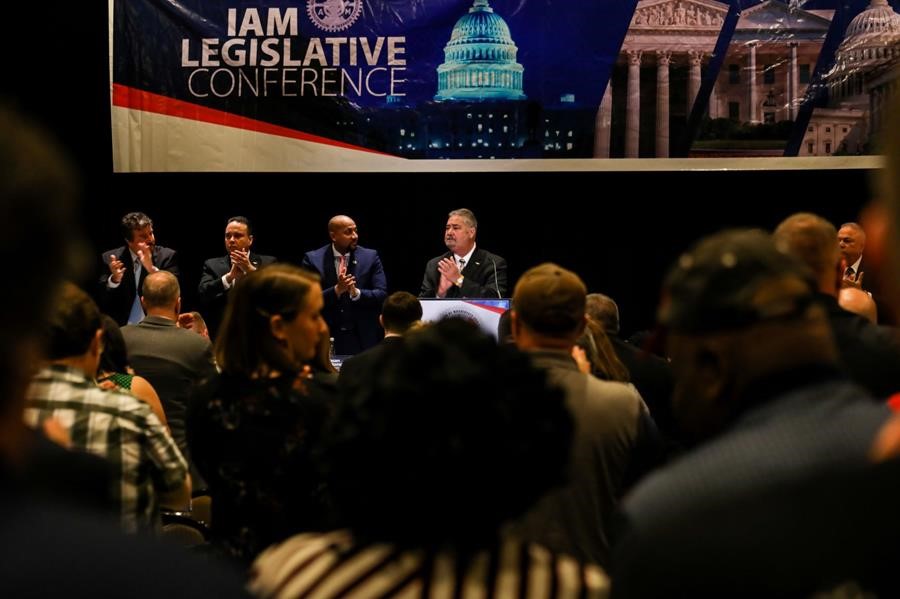 QUOTABLE: “Brothers and Sisters, I am incredibly grateful that you are all here this week fighting the good fight. Together, this union is speaking with one voice. We are growing more aggressive. And we are more confident and better prepared to take on these greedy corporations and their bought-out politicians on Capitol Hill!”
– IAM International President Robert Martinez, Jr. at the 2019 IAM Legislative Conference

TCU-IAM members will be joined by Rep. Brendan Boyle (D-PA), Rep. Brian Fitzpatrick (R-PA) and the office of Rep. Dwight Evans (D-PA). The rally will be held today, Friday, Feb. 21 at 3:30 p.m. at the southeast corner of 30th and Market streets (in front of the IRS building).

MEMBERS IN PUERTO RICO DESERVE BETTER: In response to the recent earthquake disasters in Puerto Rico, which continues to recover from tremors and hurricanes, the IAM applauds the House for passing a $4.7 billion disaster relief bill earlier this month. Two-thirds of the island was without power and 300,000 people suffered damages to their homes and were left without water. The much-needed funding would provide tax breaks for Puerto Rico residents and other U.S. territories.

The emergency aid will also offer grants for disaster recovery, infrastructure, school operations and nutrition assistance. Unfortunately, all indications show the Senate will not bring it to the floor for a vote and President Trump has already vowed to veto the bill if it ever gets to his desk. The Machinists Union will continue to fight aggressively for the disaster relief that IAM members in Puerto Rico deserve.

IAM PRAISED FOR SUPPORT OF PRO ACT: U.S. Rep. Tim Ryan (D-OH) entered IAM International President Robert Martinez Jr.’s letter supporting passage of the PRO Act into the official record during a speech on the House floor. With the IAM’s support, the PRO Act (H.R. 2474) passed by House by a vote of 224 to 194. The IAM is now urging members of the Senate to co-sponsor the pro-union legislation.

TIME RUNNING OUT TO HAVE A VOICE IN IAM’S ENDORSEMENT: IAM members have only a few days, until Wednesday, Feb. 26, at 11:59 p.m. ET to register to vote in the IAM’s 2020 U.S. presidential endorsement election. Once registered, U.S. members in good standing who register at iam2020.org will receive a link to vote during a 48-hour period beginning on Wednesday, March 4 at 8 a.m. ET.

Why are workers struggling? Because labor law is broken The New York Times

Dept. of Defense insists it has full authority to shift funds from weapons to border wall Norfolk (VA) WVEC-TV