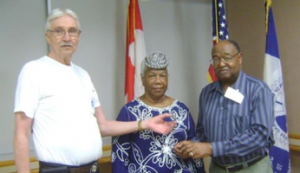 Retired Director of the IAM Organizing Department and member of Atomic lodge 480 recognized brother Marlin Phillips and his wife Thelma by congratulating them on their 50th wedding anniversary. Brother Washam asked everyone to give them a round of applause.

Larry then presented Brother Phillips of local lodge 2198, Houston, TX with a hand crafted belt buckle embedded with a “50 year IAM member” pin. The presentation of the belt buckle is just in advance of his 50th year as an IAM member. Washam asked all in attendance to give brother Marlin a round of applause. The custom crafted belt buckle was made by member, Bill Cox of “Atomic Lodge” IAM Local 480 in Oak Ridge, TN.

Brother Cox has used his talents and volunteerism for many years in the local lodge and the retirees club. His generosity and devotion to his fellow members never stops. Bill has been preparing meals for the seniors in the club and raffling his hand made belt buckles to raise money for the IAM Retirees’ Department.