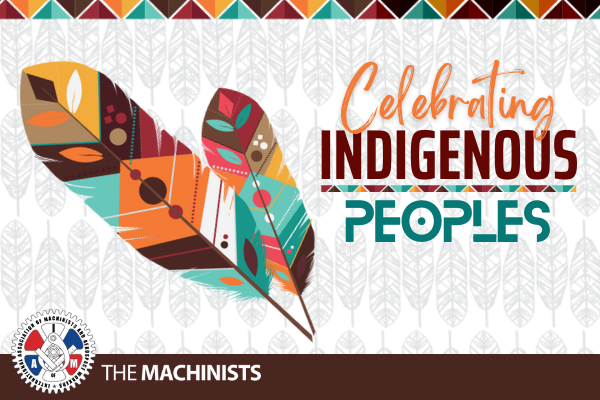 We recognize the culture and heritage of Indigenous Peoples, who deeply enrich the quality and character of our Nation; we also acknowledge the many sacrifices, contributions, and achievements of the Indigenous peoples.

According to the United States Census Bureau, in 2010, some 5.2 million people in the United States identified as American Indian and Alaska Native, either alone or in combination with one or more other races. Furthermore, the total U.S. population grew by 9.7 percent, from 281.4 million in 2000 to 308.7 million in 2010. In comparison, the American Indian and Alaska Native population increased almost twice as fast as the total for the U.S. (Office Holidays.com). This population has origins in hundreds of distinct and culturally diverse peoples from throughout North and South America; well over 600 tribes are federally recognized within the contiguous 48 states and Alaska, and many more are recognized by individual states.

Unions have played important roles in addressing Native American struggles and in campaigns that fueled civil rights movements in the United States, including efforts to organize agricultural, hospitality, and health care workers. Native American workers’ groups also point to colonialism, land dispossession, and generational trauma as central problems in workplace inequality—including the fact that from the time Christopher Columbus arrived in the New World until the year 1900, there were as many as five million Native people enslaved in America, and tens of thousands of families torn apart by forced boarding schools.

In the overall workforce, Native Americans and Alaska Natives are more likely than the overall population to work in service occupations, natural resources, construction, maintenance, production, transportation, and material moving occupations. Native Americans and Alaska Natives also serve in the Armed Forces at five times the national average and have served with distinction in every major conflict for over 200 years.

In 2011, about one in four American Indians and Alaska Natives1 (26.4 percent) lived in poverty. In contrast, about one in 10 non-Hispanic whites (11 percent) lived in poverty (U.S. Census Bureau 2013). Not surprisingly, the Native American population is a relatively low-wealth population. In 2000, Native Americans’ median wealth was equal to only 8.7 percent of the median wealth among all Americans (Chang 2010, 14). For most Americans, a home is a key source of wealth. Native Americans, however, have a significantly lower homeownership rate than whites, and the homes they do own tend to be worth much less than those of whites (Insight Center for Community Economic Development 2009, 1) (EPI).

Native Americans and Alaska Natives face disproportionately high unemployment and underemployment rates compared to other non-white workers in America. These disparities underscore the need for labor unions in the predominantly Native American workplaces to help bring increased wages, health care and equality to these communities who have given so much to who we are as Americans.

Native Americans and Jobs: The Challenge and the Promise | Economic Policy Institute (epi.org)

Unions fight for these same rights, and will continue to do so for our Native brothers and sisters.