July 30th is World Day Against Trafficking in Persons 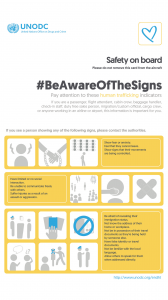 Human Trafficking is a modern form of slavery; from forced labor to forced prostitution, human trafficking is a grave violation of human rights that permeates into the world of work.

Every year, thousands of men, women and children fall into the hands of traffickers, in their own countries and abroad. Almost every country in the world is affected by trafficking, whether as a country of origin, transit or destination for victims. Immigrant workers in the U.S. and abroad have a particular vulnerability to human trafficking. In the United States, traffickers are robbing a staggering 24.9 million people of their freedom and basic human dignity—that’s roughly three times the population of New York City.

The Trafficking Victims Protection Act of 2000, as amended (“TVPA”), defines “severe forms of

trafficking in persons” as:

or services, through the use of force, fraud, or coercion for the purpose of subjection to

According to the United Nations and the US Department of State:

This year, the United Nations is focusing on the first responders to human trafficking. These are the people who work in different sectors—identifying, supporting, counselling, and seeking justice for victims of trafficking, and challenging the impunity of the traffickers.

The IAM has several members who, by the nature of their jobs in the transportation industry, find themselves in prime roles for identifying the signs of trafficking. In fact, many transportation employers (such as those in the airline industry) are training our members directly to look for these signs.

During the COVID-19 crisis, the essential role of first responders has become even more important, particularly as the restrictions imposed by the pandemic have made their work even more difficult. Still, their contribution is often overlooked and unrecognized.