Saturday Marks the Anniversary of the Civil Rights Act of 1964 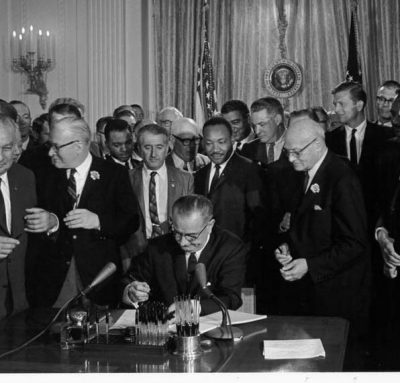 September 9th Marks the Anniversary of Civil Rights Act of 1964

After years of struggle and setbacks, advocates for equality celebrate the passage of sweeping legislation that prohibits racial discrimination.

The Civil Rights Act of 1964, which ended segregation in public places and banned employment discrimination on the basis of race, color, religion, sex or national origin, is considered one of the crowning legislative achievements of the civil rights movement. First proposed by President John F. Kennedy, it survived strong opposition from southern members of Congress and was then signed into law by Kennedy’s successor, Lyndon B. Johnson. The Civil Rights Act was later expanded to bring disabled Americans, the elderly and women in collegiate athletics under its umbrella. It also paved the way for two major follow-up laws: the Voting Rights Act of 1965, which prohibited literacy tests and other discriminatory voting practices, and the Fair Housing Act of 1968, which banned discrimination in the sale, rental and financing of property. Though the struggle against racism would continue, legal segregation had been brought to its knees.