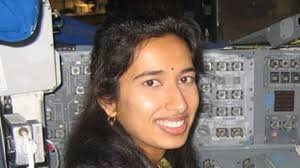 Swati Mohan who is from India, not only the face of the Perseverance landing mission on Mars, she is also the guidance and controls operations lead for the Perseverance rover mission, NASA’s most sophisticated spacecraft to date. Swati studied mechanical and aerospace engineering at Cornell University, followed by a master’s degree and doctorate in aeronautics and astronautics at the Massachusetts Institute of Technology (MIT).

Before her work on Perseverance, she was a part of space exploration efforts such as Cassini, a spacecraft that unearthed countless discoveries about Saturn, and GRAIL, a mission that sent twin spacecraft around the moon.

Her phrase and voice will mark history, as she announced to the world, “Touchdown confirmed. Perseverance safely on the surface of Mars, ready to begin seeking the signs of past life.”