October 25th Unite Together Against Bullying 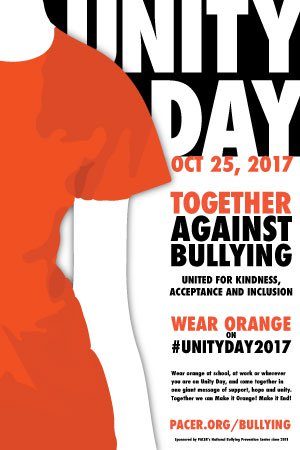 Among high school students, 15.5% are cyberbullied and 20.2% are bullied on school property (Center for Disease Control, 2015).

Among middle school students, 24% are cyberbullied and 45% are bullied on school property (Center for Disease Control, 2015).

The percentages of individuals who have experienced cyberbullying at some point in their lifetimes have nearly doubled (18% to 34%) from 2007-2016 (Patchin & Hinduja, 2016).

90% of teens who report being cyberbullied have also been bullied offline (“Seven Fears and the Science of How Mobile Technologies May Be Influencing Adolescents in the Digital Age,” George and Odgers, 2015).

More than one out of every five (20.8%) students report being bullied (National Center for Educational Statistics, 2016).

64% of children who were bullied did not report it; only 36% reported the bullying (Petrosina, Guckenburg, DeVoe, & Hanson, 2010).

More than half of bullying situations (57%) stop when a peer intervenes on behalf of the student being bullied (Hawkins, Pepler, & Craig, 2001).