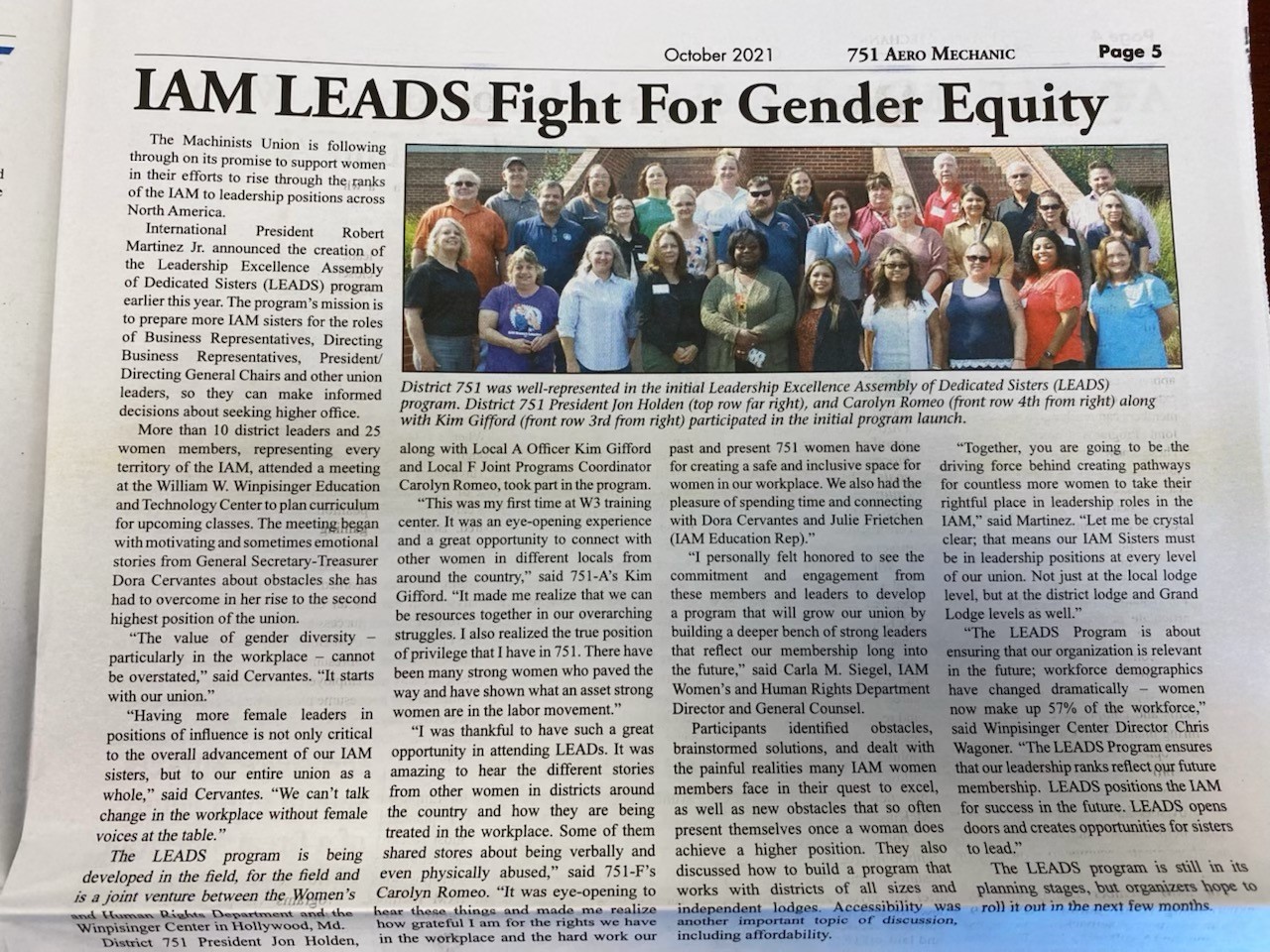 IAM LEADS Fight for Gender Equity was the title for the below article featured in the 751 Aero Mechanic October 2021 written by District Lodge 751. The Women’s Department is excited to roll out this new program and we wanted to share what members at DL 751 have to say. Please see their article below. 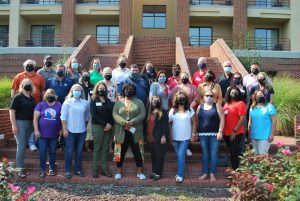 The Machinists Union is following through on its promise to support women in their efforts to rise through the ranks of the IAM to leadership positions across North America.

International President Robert Martinez Jr. announced the creation of the Leadership Excellence Assembly of Dedicated Sisters (LEADS) program earlier this year. The program’s mission is to prepare more IAM sisters for the roles of Business Representatives, Directing Business Representatives, President/Directing General Chairs and other union leaders, so they can make informed decisions about seeking higher office.

More than 10 district leaders and 25 women members, representing every territory of the IAM, attended a meeting at the William W. Winpisinger Education and Technology Center to plan curriculum for upcoming classes. The meeting began with motivating and sometimes emotional stories from General Secretary-Treasurer Dora Cervantes about obstacles she has had to overcome in her rise to the second highest position of the union.

“The value of gender diversity – particularly in the workplace – cannot be overstated,” said Cervantes. “It starts with our union.”

“Having more female leaders in positions of influence is not only critical to the overall advancement of our IAM sisters, but to our entire union as a whole,” said Cervantes. “We can’t talk change in the workplace without female voices at the table.”

The LEADS program is being developed in the field, for the field and is a joint venture between the Women’s and Human Rights Department and the Winpisinger Center in Hollywood, Md.

“This was my first time at W3 training center. It was an eye-opening experience and a great opportunity to connect with other women in different locals from around the country,” said 751-A’s Kim Gifford. “It made me realize that we can be resources together in our overarching struggles. I also realized the true position of privilege that I have in 751. There have been many strong women who paved the way and have shown what an asset strong women are in the labor movement.”

“I was thankful to have such a great opportunity in attending LEADs. It was amazing to hear the different stories from other women in districts around the country and how they are being treated in the workplace. Some of them shared stores about being verbally and even physically abused,” said 751-F’s Carolyn Romeo. “It was eye-opening to hear these things and made me realize how grateful I am for the rights we have in the workplace and the hard work our past and present 751 women have done for creating a safe and inclusive space for women in our workplace. We also had the pleasure of spending time and connecting with Dora Cervantes and Julie Frietchen (IAM Education Rep).”

“I personally felt honored to see the commitment and engagement from these members and leaders to develop a program that will grow our union by building a deeper bench of strong leaders that reflect our membership long into the future,” said Carla M. Siegel, IAM Women’s and Human Rights Department Director and General Counsel.

Participants identified obstacles, brainstormed solutions, and dealt with the painful realities many IAM women members face in their quest to excel, as well as new obstacles that so often present themselves once a woman does achieve a higher position. They also discussed how to build a program that works with districts of all sizes and independent lodges. Accessibility was another important topic of discussion, including affordability.

“Together, you are going to be the driving force behind creating pathways for countless more women to take their rightful place in leadership roles in the IAM,” said Martinez. “Let me be crystal clear; that means our IAM Sisters must be in leadership positions at every level of our union. Not just at the local lodge level, but at the district lodge and Grand Lodge levels as well.”

“The LEADS Program is about ensuring that our organization is relevant in the future; workforce demographics have changed dramatically – women now make up 57% of the workforce,” said Winpisinger Center Director Chris Wagoner.  “The LEADS Program ensures that our leadership ranks reflect our future membership.  LEADS positions the IAM for success in the future. LEADS opens doors and creates opportunities for sisters to lead.”

The LEADS program is still in its planning stages, but organizers hope to roll it out in the next few months.