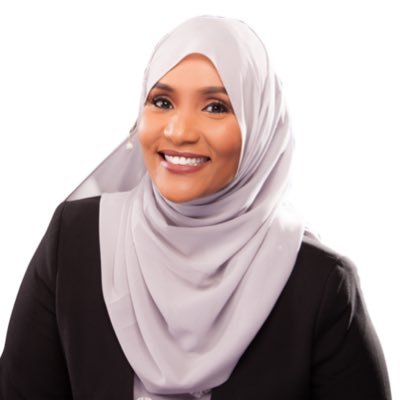 Hodan Nalayeh, from Somalia, was born in Los Anod, Somalia in 1976 and died in her beloved country on July 12, 2019.  She died in the Asasey Hotel attack in Kismayo, Somalia. She was pregnant at the time with her first child to her new husband, and was also a mother to two beautiful boys. She and her family migrated to Canada in the early 80’s in Alberta, but they eventually made their way to Toronto in 1992.

In September 2013, Nalayeh was appointed Vice President of Sales & Programming Development of Cameraworks Productions International’s Canadian operation based in Vaughn, Ontario. The company is a global, full-service and comprehensively-equipped video and television production facility focusing on pre- to post-production of business-to-business video assets.

Nalayeh served as the President of the Cultural Integration Agency, a full-service media firm specializing in the development, production, marketing and distribution of multicultural programs. In February 2014, the company partnered with Cameraworks Productions International to produce a new television format for cultural community programming. To this end, on March 1 Nalayeh began hosting the half-hour Somali community show Integration: Building a New Cultural Identity. She also served as an Executive Producer on the weekly Toronto program.

Besides media production and consultancy, Nalayeh was involved in voluntary and advocacy work for the Somali community.  She founded the Somali Refugee Awareness Project, Nalayeh also worked closely with a number of non-profit organizations.

She was an inspiration to a whole nation, and the Somali diaspora, because she was a beautiful, bold, youth black community leader, accomplished single mother and the voice that resonated with so many people inspiring us not to give up, no matter the challenge.  She was a personal inspiration to many women, because she took the time through face to face meetings and Social media to inspire all of those who were striving and working towards a brighter future for our children.