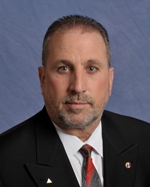 Philip J. Gruber has been a member of the Machinists Union since his initiation into Local Lodge 688 in 1972. It was then that he began his apprenticeship. He became a Journeyman Tool & Die Maker in 1976. He served as Steward, Chief Steward, Treasurer and President of Lodge 688. He was elected as delegate to the St. Louis Labor Council, the Missouri State Council of Machinists and the IAM National Tool & Die Conference.

Gruber has served as Secretary-Treasurer, then President of the District 9/PAC and the Missouri State Council of Machinists. He also has served as Secretary-Treasurer of the Midwest States Conference of Machinists, the National Tool and Die Conference and as Chairman of the District 9 Joint Apprenticeship Committee. Gruber was a member of the National Planning Committee, the IAM Law Committee, the Board of Directors of United Way of St. Louis, and still serves on the Board of Directors for Guide Dogs of America, and the Illinois Workers Compensation Advisory Board. He has been a Delegate to every Grand Lodge Convention since 1980.

In 1984, Gruber was part of an IAM delegation that traveled to Japan to study and compare the culture of the Asian workforce and their labor organizations to the American system.