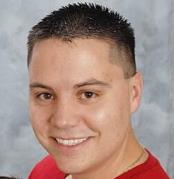 “As an emerging leader in the IAM’s Young Machinists program, Josh will bring new ideas and young talent to the auditing team,” said Cervantes. “The General Secretary-Treasurers’ department is pleased to welcome Josh and look forward to the contributions he will make to our membership.”

Diaz’s career began in 2001 as an Apprentice in the Mechanical Measurements department at Sandia National Laboratories in Albuquerque, NM, where he became a Journeyman in 2007. Diaz served his Local and the New Mexico State Council of Machinists as Secretary-Treasurer from 2008 until 2012, when he was appointed by Western Territory General Vice President Gary Allen to serve as Communications Representative for the Western Territory.