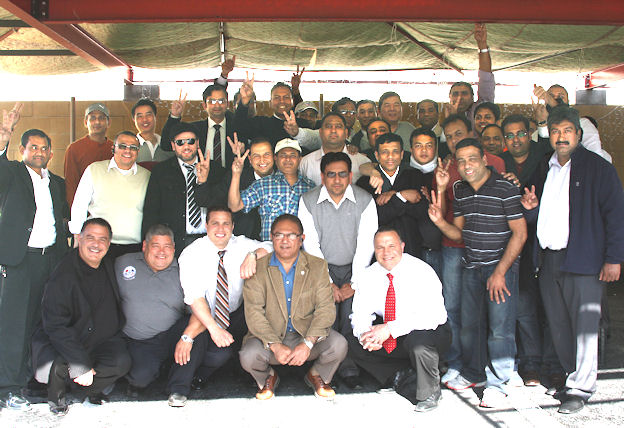 A courageous group of nearly 200 drivers employed by Town Car International in Long Island City, NY, overcame a fierce anti-union campaign to cast ballots this week for IAM representation. The new members, also known as ‘Black Car Drivers,’ gathered last summer at the Winpisinger Education & Technology Center to prepare for the fight ahead and to make plans for reaching out to nearly 10,000 Black Car Drivers across New York and New Jersey.

Nearly all the drivers, who provide premium personal transportation services in the New York metropolitan area, are recent immigrants trying to build a good life in the United States. To get started in the industry, they must first purchase an upscale vehicle and buy a “franchise” from a “base” for up to $80,000. The “base” provides them with a dispatcher and client contacts. All of the other operating costs, including upkeep, maintenance, insurance, even monthly fees to the dispatchers, are born by the drivers.

Much of the money earned by Black Car Drivers goes to expenses. The approximately $70,000 a driver can make is whittled down to less than $25,000 after paying for the vehicle and gas, maintenance and insurance, as well as base fees, radios, car washes and fines from both the city and the company. Most drivers work 12-to-15-hour shifts, six days per week.

Town Car International officials opposed the organizing campaign from the start, threatening to end the driver’s employment status, offering bribes and standing goon-like at the location where drivers voted. Other tactics used to try to sway the election included job assignments that made it difficult for drivers to return in time to cast a ballot.

“In the end these workers could not be bought or intimidated,” said District 15 DBR Jimmy Conigliaro, Sr. “This was an important victory for the drivers and their families, but even more so the entire Black Car Industry.”  District 15 in New York City already represented about 100 drivers in the industry but has a broad ranging campaign to win justice and fairness for the entire industry.

“These drivers deserve our congratulations and our highest respect,” said Eastern Territory GVP Lynn D. Tucker, Jr. “They came from around the globe prepared to work hard and build a better life, only to face threats and intimidation if they dared seek a voice on the job. We are a better union and a better country for these workers and the inspiring example they provide.

“Thanks also go out to District 15 DBR Jimmy Conigliaro and his staff, who worked hard, literally for years, to educate drivers, the community and even the industry on the benefits of IAM membership and collective bargaining,” said Tucker. “And this is just the beginning.”