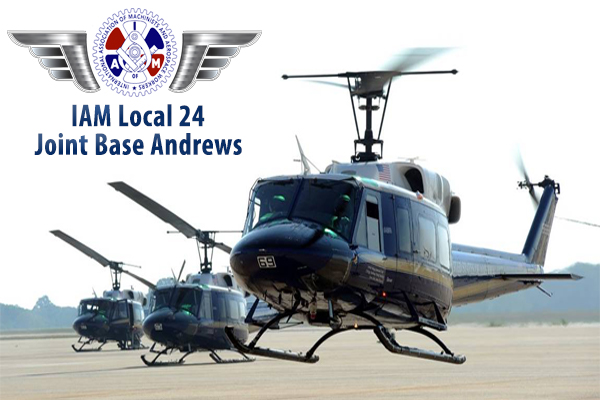 At Joint Base Andrews (JBA) in Maryland, where Air Force One is housed, nearly 400 members of IAM Local 24, District 4 are once again covered under IAM contracts that protect their rights and their voice on the job.

“The negotiating committee was able to secure three outstanding agreements which set the bar for other aerospace bargaining units across the country,” said IAM’s General Vice President of the Aerospace Department Mark Blondin. “The district leadership prepared themselves and the members well for these negotiations, and that preparation paid off.  Despite obstacles stemming from COVID-19, we will continue to secure better wages, affordable health care, secure retirement and job security for our highly skilled membership.”

Under three separate contracts with DynCorp International, IAM members hold a variety of positions on the base, from functional check flight (FCF) pilots to helicopter and back shop maintenance. These three contracts were recently ratified, offering union members a good work/life balance.

“Especially during these tough economic times, it’s more important than ever we make sure IAM agreements reflect the honed skills of our members who have been, and will remain, on the job through the obstacles created by COVID-19. The teams at Joint Base Andrews deserve contracts that mirror the dedication they have for their crafts and the service they provide to this country,” said Eastern Territory General Vice President James Conigliaro Sr. “The negotiating team did an exemplary job at the table.”

The FCF pilots contract included an increase of more than $6 in wage increases, 64 hours of paid sick leave, the stabilization of health premiums over the life of the contract and improvements to working conditions.

The hardworking men and women in helicopter maintenance who work on the UH-1N Helicopters, among other aircraft, will see an average of a 3 percent rise in wages, while benefitting from increases in the flex benefit credit and the freezing of health and welfare premiums for the entirety of the contract. This group also negotiated a 30 cent increase to the IAM National Pension Fund and gains to shift differential pay.

The third contract ratified covers executive airlift and back shop maintenance group of employees who take care of the Presidential Air Group, the fleet of aircraft used by the president and other senior White House officials. This bargaining unit shares some of the same benefits received by the other two work groups. Pay increases of nearly 3 percent over the three years of the contract, as well as increases to the IAM Pension Fund, shift differential pay and money for uniforms and cold weather gear are just a few of the negotiated benefits for these workers.