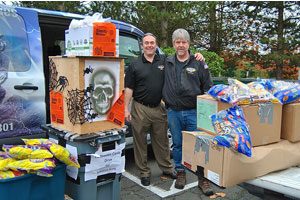 Seattle District 751 once again teamed up with the Salvation Army to make Halloween sweeter for the children of nearby White Center, WA.

Union members have collected 550 pounds of candy for the Salvation Army’s annual Halloween party in White Center, which provides a safe alternative to trick-or-treating for children in that community.

Donations of unopened, individually wrapped candy can still be dropped through Friday, October 28, at any District 751 union hall in Puget Sound, including the Seattle Union Hall at 9125 15th Place S., in South Park.

“Lots of kids and families benefited from your organization’s generosity,” said Maj. Raymond Erickson-King, who was formerly the Salvation Army’s senior officer in White Center.