District 776 Members at Lockheed Speak Out 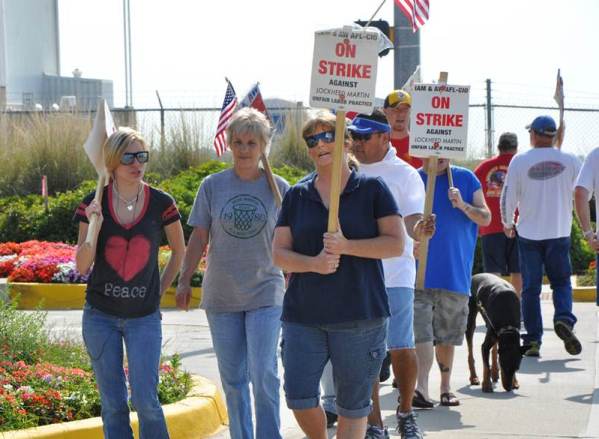 “Our forefathers fought for this pension plan. They fought for our insurance. They fought for our wages. Everything we have today is because of them,” says District 776 member Pauline Ramos in ‘Ain’t No Way,’ a new IAM video about the strike at Lockheed Martin. “I’ll be damned if I’m going to tell them that it was on my watch that we gave up pensions for new hires,” added District 776 President Paul Black.

Those are the sentiments on picket lines, in coffee shops and across kitchen tables in Maryland, California and Texas, where 3,700 IAM members of District 776 are on strike against Lockheed Martin rather than accept a contract members say is riddled with takeaways.

“This membership is drawing a line in the sand,” said Southern Territory GVP Bob Martinez. “No more takeaways, no more concessions.”

IAM members voted by a 94 percent margin to reject Lockheed’s so-called “Last, Best and Final” offer, which included language to bar new hires from participating in the defined benefit pension plan. The rejected proposal also called for switching a majority of Lockheed workers to a high-deductible, high-cost health care plan with no cap on annual out-of-pocket expenses.

The contract was turned down by 94 percent of members casting ballots.

“Lockheed is yet another highly successful company seeking to further enrich itself at the expense of its workforce,” said Aerospace GVP Mark Blondin. “The members at Lockheed are taking a stand for themselves, their families and coworkers in a fight that matters to every union member in America. They deserve our respect and our support.”

In addition to protecting legacy benefits, the workers who build the F16 and F35 at Lockheed’s Ft. Worth, TX facility have the mindset needed to complete a successful strike. “It’s the right battle and we have to stay out here one day longer than they (Lockheed) can stand it,” said District 776 members Kevin Burns. “That’s basically the motto: one more day.”

The video can be viewed by clicking here.