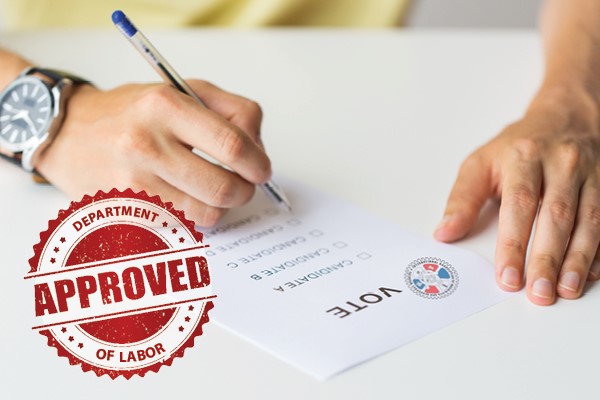 The re-election of incumbent IAM Grand Lodge Officers has been upheld by the U.S. Department of Labor (DOL). More than 770 IAM Local Lodges, over 97 percent of all lodges, endorsed the incumbent slate in February.

“Just like our union fights for democracy at work, we also defend democracy within our own IAM family. We have a long history of being a strong, aggressive union because we believe in the principle of ‘one member, one vote.’ I can now report that the will of our membership has been vindicated,” said IAM International President Robert Martinez Jr. “Myself and the entire Executive Council are extremely grateful to the members and their Local Lodges for their support. It is the honor of our lives to continue to serve our members, their families and their communities.”

“Our members can be proud that they have once again chosen unity and strong leadership,” said International President Martinez. “Across North America, our members see that our union is growing in numbers and gaining strength at the bargaining table. That momentum will only continue under this leadership team. Let’s continue the work we’ve started and keep putting the ‘fight’ back in the Fighting Machinists.”

Click here for the report of Grand Lodge Tellers.