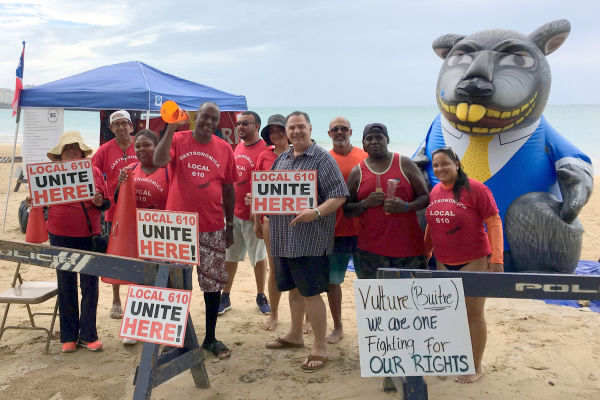 What do you do if you planned a trip, traveled all day and checked into your hotel, only to discover the union employees of that hotel had been kicked out by their employer?

If you’re IAM Eastern Territory General Vice President Jimmy Conigliaro, Sr., you go to the front desk and tell the manager you not only are disgusted at how he’s treating the working men and women of the hotel, but you are checking out in protest and support of those workers.

Conigliaro didn’t stop there. After checking out of the hotel, he and his wife, Gissel, joined the picketing workers, members of UNITE HERE Local 610, on the picket line.

“What a great feeling,” said Conigliaro. “To be that far from home, and being able to go out, and support working men and women, by joining their protest, we were ecstatic.”

After the picketing members learned of Conigliaro’s experience at the hotel, they started a new chant:

“The workers were so appreciative and charged by us walking out of the hotel and joining their picket in support,” said Conigliaro. “But the amazing thing was that by doing the right thing, it energized us. It demonstrates how, as union members, we can support working family issues wherever we go.”

The members of UNITE HERE Local 610 are employed at the El San Juan Hotel, Isla Verde, and after two months on the line, more than 400 workers voted unanimously to accept the new collective bargaining agreement. Calling the new accord, an “extraordinary agreement” a spokesperson said that in general terms the union achieved their original proposal.