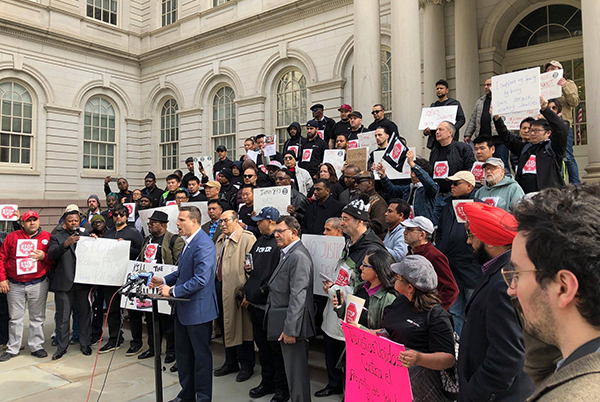 Nearly 400 members of the Independent Drivers Guild (IDG) rallied outside City Hall in New York yesterday prior to a hearing on a proposed bill that would tighten regulations on the industry and cost drivers even more money. The Independent Drivers Guild is a nonprofit affiliate of the IAM and represents 65,000 working drivers throughout the for-hire vehicle industry.

Read the IDG Statement to the Committee on For-Hire Vehicles

At the heart of the dispute is a bill sponsored by Bronx Councilman Ruben Diaz Sr., which would separate ride-hail companies from their current classification as a black car service into a new “app-based for-hire” category in order to tighten restrictions on the industry.

“Intro 838 and similar destructive proposals would put our members and other app-based drivers and their families’ livelihood in serious jeopardy,” said IDG Founder and President Jim Conigliaro Jr. “The proposed $2,000 fee and prohibition preventing any driver working for an app-based transportation service from driving for any other company including black car, livery or medallion service will ultimately force many of these drivers deeper into poverty.”

Meera Joshi, the commissioner of the Taxi and Limousine Commission, warned that the Diaz bill would financially burden drivers by increasing their vehicle license fee currently set at $550 every two years and by limiting their flexibility to work for several apps as a way to fill gaps in demand.

“The IAM stands behind the IDG in their efforts to not only stand up for these drivers, and their families,” said Eastern Territory General Vice President Jimmy Conigliaro Sr. “We also support their legislative efforts to ensure these independent workers are on a level playing field in the future.”

Watch members tell how Intro 838 hurts them and their families.

Today Hundreds of Guild members marched on City Hall to protest the Diaz bill which would tax drivers $130 million per year and forbid use of multiple apps. At 03:15 Diaz arrives — and IDG told him what we are going to do to his bill.