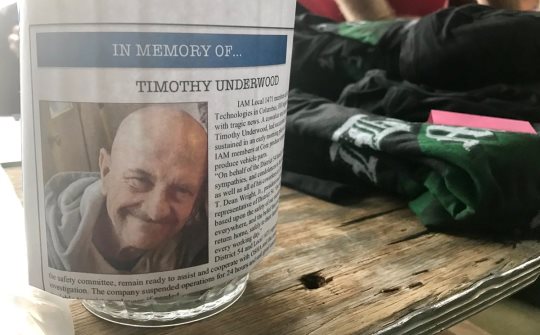 When the Dropkick Murphys took the stage for the sold out Ohio AFL-CIO Union Night in Columbus, OH, they did more than deliver a memorable Celtic punk concert. They played to lend a hand in the fight against right-to-work and to raise money for a fallen IAM member’s family.

The Ohio AFL-CIO made special anti-right to work T-shirts, which were sold at the concert. Five dollars from every sale went to the family of Tim Underwood, an IAM Local 1471 member who lost his life on the job in June 2016.

“This is just an awesome evening for labor,” said IAM District 54 President and Directing Business Representative Dean Wright. “For us to come out and do this for Brother Underwood’s family is just a tremendous sign of respect for his membership in the IAM.”

“When labor first heard about the tragedy involving brother Tim Underwood, we knew we had to find a way to help,” said Ohio AFL-CIO Political Director Jason Perlman. “The opportunity to work with the Dropkick Murphys, America’s most pro-worker band, proved to be the perfect chance to join together to help Brother Underwood’s family. Every union member was honored to help, after all, anyone in a union knows we always stand in support of our sisters and brothers.”

For the Dropkick Murphys, a band known for supporting the working class and unions, the event was an opportunity to stand up for labor and Underwood’s family and give the audience an evening of unforgettable music.

“We’re just honored to be able to be here and to show up and lend our hand,” said singer, songwriter and bass guitarist Ken Casey. “We’re happy to be a part of raising money for his family.”

“It is an honor that the band has come out to lend a hand, not just to the IAM, but to unions, and working families as a whole,” said IAM Eastern Territory General Vice President Jimmy Conigliaro, Sr. “Our deep appreciation goes out them, and the Ohio AFL-CIO for their efforts to assist the family of our fallen brother.”