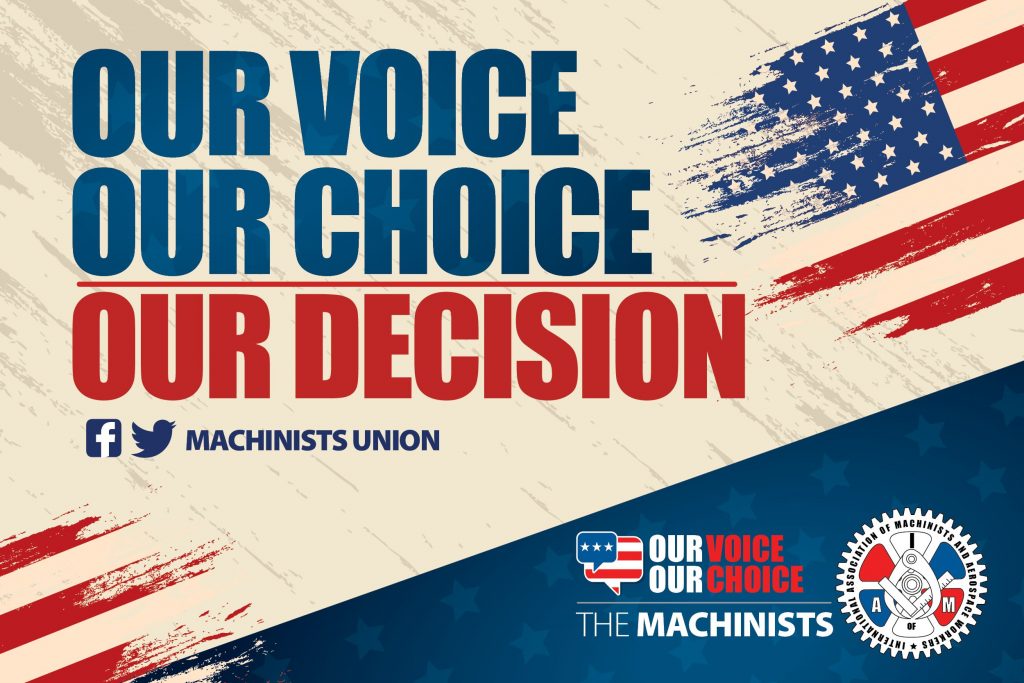 Why is the IAM involved in politics?

Politics affects everything about our lives. Legislation enacted and decisions made by elected officials impact our work lives and the ability of our union to fight for better pay and benefits for our families. There is a direct link between the ballot box and our economic and workplace security—and the enemies of working people are more engaged than ever in trying to destroy us.

The IAM engages in politics because we care about working family issues—job security, workplace safety, healthcare, retirement, and the right to join a union—just to name a few. We stay away from so-called “wedge issues” that only serve to divide working people.

No, the Machinists Union does not use your dues for political campaign contributions. Your dues pay for servicing you as a member, including for bargaining and enforcing your contract and organizing new members to build our union’s power.

To learn more about how dues are spent, visit iam4.me/dues.

Is the IAM telling me how to vote?

No. The most important thing is that you do vote and make an informed decision for you and your family. With the future of our nation at stake, we owe it to our children and grandchildren to get engaged in politics.

So, make sure you are registered to vote. Make a plan to vote early, by mail or on Election Day. Lastly, get everyone around you to vote, too.

We have compiled all the voting information you may need at iam2020.org.

What is the Machinists Non-Partisan Political League?

MNPL allows IAM members to gather individual contributions, coordinate political activity, and elect candidates who support IAM members and their families. Candidates we support know that the MNPL stands for economic justice, security in the workplace, and equality for every member. They do not take us for granted.

The MNPL scrutinizes each candidate thoroughly. We ask tough questions such as their positions on trade, labor law reform, economic conversion, transportation policies, and enhancement of the U.S. manufacturing base.

To learn more about MNPL and to become a contributing member, visit goIAM.org/mnpl or contact your shop steward.

How does the IAM endorse political candidates?

The IAM Legislative Department examines the political positions of each candidate and scrutinizes his or her voting record. This information is then shared with local lodges, districts, and state councils. Members are able to make an informed choice when they endorse a candidate or vote in an election.

U.S. senatorial and congressional endorsements are made at state councils. MNPL contributing members across the United States get involved in politics at the ground level. You can be a part of the questioning, and then advocating for political candidates who fight to protect our jobs, pensions, health and safety, and wages.

Just like the name suggests, MNPL endorses and supports candidates who fight for American workers and advocate for our members, regardless of political affiliation. IAM State Councils have a long history of supporting Democrats, Republicans, and Independents.

How was the IAM’s 2020 presidential endorsement different?

For the 2020 presidential election, the IAM did something never before done in our union or the modern U.S. labor movement.

Every IAM member in good standing had more than nine months, beginning in May 2019, to register on iam2020.org for the Machinists Union’s 2020 presidential endorsement election. Registration was advertised in iMail, IAM State Councils, social media, IAM conferences and meetings, and in the pages of this publication, the IAM Journal.

In March 2020, shortly after Super Tuesday, every IAM member who registered was given the chance to vote online for who should receive the union’s endorsement for president, regardless of political party.

Here are the results of the general membership vote, held March 4 to 6, 2020:

Out of the IAM’s State Council Presidents who voted in a March 8 vote between the top vote-getting candidates as chosen by the membership from each party, Joe Biden and Donald Trump, 100 percent cast their ballots for Biden.

The IAM’s endorsement made history and it required presidential candidates to really work for our endorsement and speak to the issues that affect our lives every day.

What are the priorities of IAM members in this election?

IAM members have made it clear that they want a president who shares their priorities. In two independent surveys conducted this election cycle, IAM members listed these priorities:

What impact has politics had on IAM members under this president?

Unfortunately, the political and legislative climate today continues to be largely defined by corporate greed and a continued attack on U.S. workers. The current president came into office with promises to create millions of high-quality jobs, revitalize our domestic manufacturing industry, bring the long-departed jobs back to U.S. soil and improve the economic well-being of American workers and their families.

This administration’s fumbled response to the COVID-19 pandemic has resulted in more than 200,000 deaths and more IAM jobs lost than at any time since the Great Depression.

Let’s take a look at the record:

Outsourcing: Despite the president’s pledges that American workers “won’t lose one plant” and declarations that plants “are all coming back,” more than 50 IAM-represented plants have closed since 2017. Many of the jobs have been offshored to Mexico, China, or other countries with low wages and little to no rights for working people. Hundreds of thousands of U.S. workers who have lost their jobs due to outsourcing are still waiting for those jobs to come home, despite the administration’s promises.

Some of the plants closed include Electrolux in Minnesota, Siemens in Iowa, Schneider Electric in Virginia, and UTC in California, just to name a few. The IAM sent letter after letter to the president asking for White House assistance in saving these jobs and communities starting soon after he took office. No responses were received.

The 2017 so-called “Tax Cuts and Jobs Act” actually incentivizes corporations to outsource our jobs overseas and gives the wealthiest among us tax breaks.

Your Rights at Work: This administration has attacked working people and our rights at every turn, including:

– Appointing anti-union, anti-worker judges to courts at all levels, including the Supreme Court.

– Blocking legislation like the PRO Act, which would hold companies accountable for intimidating workers during organizing campaigns and end so-called right-to-work laws that weaken unions.

– Rolling back many rules that made organizing a little easier for working people, and instead helped employers stall union elections even more.

– Attacking safety and health laws and making OSHA almost nonexistent during the pandemic. The president and his allies in Congress have also failed to implement numerous protections passed by Congress for airline workers, including adequate rest for flight attendants and increased penalties for assaulting airline workers on the job.

– Ending the requirement that federal contractors offer employment to workers on an expired contract, which affects tens of thousands of IAM members covered by the Service Contract Act, especially in the defense industry.

– Making it much harder for federal employee unions like NFFE-IAM Federal District 1 to represent members on the job.

– Appointing an anti-union National Labor Relations Board that has made numerous rulings against working people, including one that invalidated a vote by Boeing South Carolina workers to join the IAM.

Despite the attacks on working people, the IAM continues to fight, and win, for our membership on Capitol Hill. The IAM Legislative Department mobilizes elected officials to fight plant closures and obtain federal Trade Adjustment Assistance, as seen in recent layoffs at Boeing and Alcoa Intalco Works.

Healthcare: The current admiration and its allies in Congress have launched an all-out effort to dismantle many improvements in employer-based coverage. Though the Affordable Care Act is not perfect, it includes protections against pre-existing condition restrictions, eliminates annual and lifetime maximums, and ensures coverage for dependents up to age 26. Thankfully, thanks to the IAM’s activism, most of the attacks have been relatively unsuccessful. The IAM was even able to repeal a 40 percent tax on good health care benefits that would have affected many IAM families. Despite the president’s promises to “cover all Americans,” the U.S. remains the last major industrialized nation that does not guarantee healthcare to all citizens.

Trade: The United States-Mexico-Canada (USMCA) trade agreement, or NAFTA 2.0, is now law. Some claimed the revised agreement would not only stop the outsourcing of our work to Mexico, but it would also bring our jobs back home. Unfortunately, USMCA will not stop outsourcing and will not bring our jobs home. It fails to stop U.S. corporations from abandoning the U.S. workers who made them so successful. The outsourcing of our jobs to Mexico will continue as long as USMCA and other government policies maintain incentives for corporations to move work to Mexico.

Retirement Security: The IAM firmly believes that after a lifetime of hard work and dedication, working people should be able to retire with dignity and economic security. Despite the president’s promises to protect Social Security and Medicare, the administration’s plan to eliminate the payroll tax could endanger Social Security by 2023. The IAM-supported plan to help strengthen multi-employer pension plans, the Butch Lewis Act, has been blocked for years by this administration and the Senate.COVID-19 Response: The IAM has been engaged since Day 1 of the COVID-19 pandemic to get relief for our members and all working people. Unfortunately, the president’s party has made every effort to stop much-needed relief to the American people.

For example, the Senate GOP coronavirus relief plan, known as the HEALS Act, which the IAM strongly opposed and was able to stop:

– Includes no airline and railroad relief;

– Gives immunity to companies that endanger their employees;

– Includes no pension relief, no COBRA subsidy, and no eviction moratorium;

Visit iam2020.org for more information on issues important to our union this election cycle.