Executive PayWatch: Your CEO Makes 331 Times More Than You 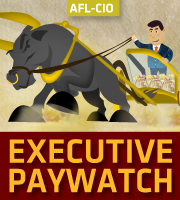 Wal-Mart Chief Executive Michael Duke, ranked No. 69 on the list of 100 Highest Paid CEOs, took home over $20.5 million in 2013. Don’t tell that to the corporate giant’s million-plus employees, half of whom earned less than $25,000.

Many of them need government assistance just to survive. Wal-Mart, the largest private employer in the United States, cost taxpayers in 2013 approximately $6.2 billion in food stamps, Medicaid, subsidized housing, and other public assistance, according to an April 2014 report.

But it isn’t just Wal-Mart that has a startling disparity between CEO and worker pay. Across the country, the average CEO made 331 times more than the average worker, according to AFL-CIO’s newly-released 2014 Executive PayWatch.

The Executive PayWatch is a searchable online database that provides direct comparison of top CEO pay to the average wages to nurses, teachers, firefighters and more.

“It calls attention to the insane level of compensation for CEOs, while the workers who create those corporate profits struggle for enough money to take care of the basics,” said AFL-CIO President Richard Trumka.

The website also offers visitors the ability to compare their own pay to the pay of top executives, highlights the 100 top-paid CEOs, and breaks down CEO pay data by state and by industry.

“These companies are run by shortsighted business leaders, because people who earn minimum wage, for instance, can’t afford cellphones from T-Mobile or dinner at Red Lobster or the Olive Garden, both of which are owned by Darden Restaurants,” said Trumka. “America’s CEOs – as exemplified by the individuals of these companies – are cannibalizing their own consumer base. It’s wrong, it’s unfair, and it’s bad economics.”

Click here to sign the petition to raise the minimum wage to $10.10 an hour and help lift more than half of the nation’s working poor out of poverty.