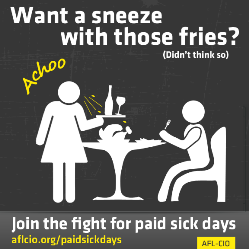 Paid sick leave is a good deal for employers, too.

A diverse range of stakeholders at a recent Aspen Institute panel agreed that an employee with paid time off when they’re ill leads to increased productivity, better health and a more stable family life.

Currently, over 40 million Americans don’t have paid sick leave. The Family Medical Leave Act (FMLA) provides unpaid sick leave for some workers, but many can’t afford to lose their paychecks.

Click here to watch video of the panel, entitled, “Time to Care: A Discussion on Improving Paid Leave Policies for Workers, Businesses and Our Economy.”

Makini Howell, a Seattle restaurant owner, said she began providing paid sick leave even before Seattle began requiring it in 2012. “It’s only half a percent of your bottom line,” and “it helps your retention” of workers, she said.

“Without paid sick days, people delay treatment. They go to work when they’re sick,” Earle said. “They are sick longer. They are out of work longer.”

At least 163 other countries have paid sick leave, and California has had mandated paid family leave since 2004.

Click here to learn more about the movement to guarantee paid sick leave for all workers.