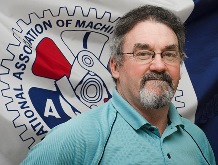 Gord Falconer will be the new IAM Canadian Chief of Staff, effective May 1, 2016.

“Gord has the ability to get things done and his accomplishments as head of our political action efforts is just one example,” said newly-appointed IAM Canadian General Vice President Stan Pickthall. “He was the right man for the job.”

Falconer was appointed Grand Lodge Representative in charge of political action in June 2013. He was also responsible for overseeing apprenticeship programs, job planning and skills training. In 2002, Falconer was appointed Canadian Education Representative. He began working with the Machinists in Fall 2009 as Director of Special Projects. He has sat on various Canadian Labour Congress and Ontario Federation of Labour training and technology committees.

Falconer has been a union activist since the 1970s, holding positions of president, vice president, treasurer and member of the grievance committee. He also served as an instructor for steward training, leadership development, job evaluation, pay equity, worker empowerment and train-the-trainer.