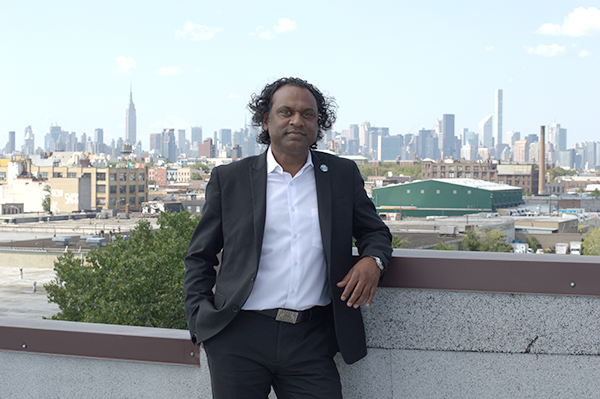 Sohail Rana looks down the row of a bustling parking lot outside LaGuardia Airport. In seconds, he darts ahead for the first of dozens of conversations he’ll have with for-hire drivers on a seasonably warm summer day in Queens.

Rana chats with a middle-aged man named Luis, who nods as he cleans the outside of the SUV he drives for Uber. “The only way we’ll change things is by joining together—all of us drivers with one voice,” says Rana.

Luis says he drives 14 hours a day, six or seven days a week, “just to survive.” Three years ago, he made the same amount in eight hours.

For-hire drivers like Luis remember making a decent living picking up fares in New York City. Today his app is full of icons representing other drivers looking for the same rides. While passengers enjoy Uber’s fare cuts, brought on by competitors like Lyft and Juno, drivers continue to pay the same commission. Expenses such as gas, insurance, leasing fees and maintenance remain.

This isn’t what Sofia, an immigrant from Haiti who began driving for Lyft three months prior, had imagined.

As from LaGuardia. Market saturation has made it more economical to wait in the for-hire lot than burn gas searching for rides, drivers say.

Sofia quit a full-time job as a home nurse to take care of her fouryear-old daughter. Driving has a more flexible schedule, but she’s not making as much money as before.

Rana hands her a flyer for the Independent Drivers Guild, or IDG, a Machinists Union affiliate bringing together for-hire driver like herself. Sofia gives her contact information and says she’ll attend a meeting.

“Next time I see you in the lot, I want you to become a member,” says Rana. “Any more questions?”

Sofia pauses. “Do you help with immigration?”

“I miss my family. My family is back in my country,” says Sofia. “I’ve been waiting so long for the immigration court to have an interview. So far, I’m not sure about what they’re going to do.”

“This is your lucky day,” says Rana, explaining that members get access to legal services through a partnership with an immigrant advocacy organization. Nine in 10 New York City for-hire drivers are immigrants, according to an IDG survey.

Rana, who moved to the U.S. from Pakistan, has driven in the for-hire industry for more than two decades. He used to drive for a black car company. Now, he drives for Uber.

He’s also the lead field organizer for the IDG.

The IDG made waves in May 2016 by becoming the first labor organization to negotiate a seat at the table with a ride share company. It represents more than 45,000 for-hire drivers in New York City, uniting drivers from the five boroughs to take on the giants of the so-called gig economy—Uber, Lyft, Juno and Via.

A third floor office in a repurposed Brooklyn paper mill serves as IDG’s headquarters. It’s where the innovative organizing project, and its growing number of driver-activists, hope to change the future of work. 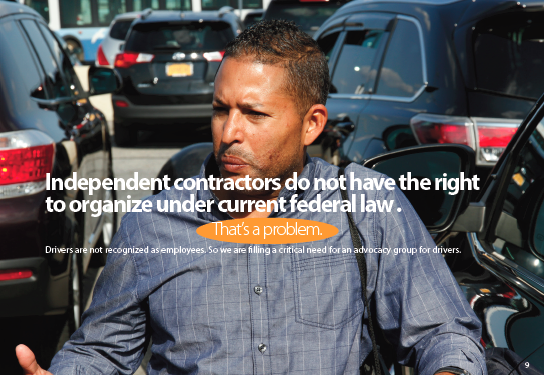 “We tell them: ‘You are a professional. You are not a regular driver,’” said Muhammed Barlas, a longtime black car driver and IAM organizer. “Nobody can abuse them if they are professionals.”

This week’s meeting includes an exercise that maps power in the Taxi and Limousine Commission, or TLC, the regulatory agency that controls New York City’s for-hire industry. The IDG recently won an in-app tipping option for all app-based drivers in the city. Uber, overturning its longstanding opposition to tipping, made tipping nationwide after pressure exerted by IDG in New York.

The next campaign is aimed at ending the industry’s race to bottom by establishing minimum mile and minute pay and limiting the number of TLC licenses.

“Everyone is going to be against us,” IDG Organizer MaryGrace DeCottis tells stewards, who she asks to sign up for time slots to hand out flyers and make phone calls. The ambitious campaign will help sign up new members, she says.

“I think the drivers will be militant as long as we give them a reason to be militant,” says DeCottis.

IDG’s office is buzzing almost every day of the week. It recently held its first-ever “Five Star” customer service class. Drivers who are deactivated due to low ratings in certain instances are reactivated after attending the class. IDG members in New York speak more than 30 languages, so the program focuses on polite English phrases.

A day earlier, a man who had been driving professionally for more than three decades walks into the office. He had been deactivated due to customer complaints of dangerous driving.

DeCottis helps him fill out a form to appeal the deactivation. He will appear in front of a panel of five for-hire drivers, chosen from a pool of IDG-approved drivers, where a decision will be made on the merits of the deactivation. Before the IDG founding, there was no recourse for deactivated drivers.

Larbi, an IDG shop steward, sees it as a critical function of the organization.

“Most drivers are just looking for answers,” he says. “When drivers are deactivated, that’s their livelihood. They have family, they have mortgages, they have a loan on their car.”

He sees a lot of room for an improvement in the for-hire industry. He had driven six hours on the day of the steward meeting. He made only $38.

The IDG, a first-of-its-kind advocacy group in the so-called gig economy, can begin to flip the script, says Michele Dottin, an IDG shop steward. She was a critical part of the campaign to install portable bathrooms at for-hire driver waiting lots at LaGuardia and JFK.

“Nobody is going to watch your back but yourself,” she says. “If you’re not doing anything to improve your situation, why are you griping? It doesn’t make sense.”

In a line of work that doesn’t recognize drivers as employees, the IDG is filling a critical need for an advocacy group for drivers. Independent contractors do not have the right to organize under current federal law.

“Fighting for a raise is the one thing that brings all working people—no matter where they’re from or what they believe in— together in unity,” said Ryan Price, IDG executive director.