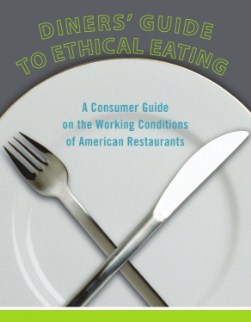 Protests calling for a living wage for fast food and restaurant workers around the country are heating up and spurring action.

Per an agreement with the New York State Attorney General’s office, 25 workers for Domino’s in New York City, fired for complaining to management about earning far below minimum wage, will be back to work in time for the holidays – with higher pay.

The workers, hired as tipped workers, were forced to do non-tip work like cleaning and kitchen work, forcing them to bring home the New York state tipped worker minimum wage of just $5 an hour. New York labor law requires tipped workers be allowed to make up the difference from the regular minimum wage in tips. These workers were not given that opportunity.

According to Restaurant Opportunities Center (ROC) United, there are 10 million restaurant workers in America, yet most of them make less than $9 an hour. Two-thirds of these workers – people who cook and prepare our food – come to work sick because they don’t have paid sick leave.

Show your support for restaurants that treat their workers well by using the ROC Diners Guide. The guide is available as a PDF or as a mobile app on the Android and iPhone.