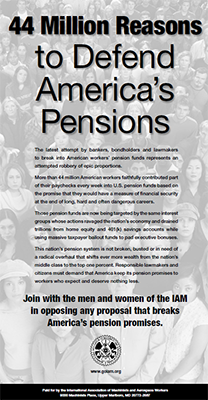 The first salvos in the battle for workers’ pensions have been fired, and the war could be coming to the U.S. Congress this month.

Detroit is trying to saddle the city’s bankruptcy on the backs of its 21,000 retirees by slashing their pensions. The Mayor of Chicago, where the costs of public pensions are merely an inconvenience, also has the city workers’ hard-earned retirement funds in his crosshairs. Even the International Brotherhood of Teamsters’ (IBT) Central States Pension Fund is looking to make across-the-board cuts.

And it could be getting worse.

Congress is about to introduce a bill that would allow “deeply troubled” pension funds to cut benefits for people who have already retired, something that is now illegal. It would give the green light to Corporate America and others to further slash retirees’ payouts and reduce already-earned credits for current workers.

This all comes at a time when more than approximately half of American workers have less than $2,000 saved for retirement. Thirty-five percent of Americans over the age of 65 rely almost entirely on Social Security payments alone. Only 20 percent of American full-time employees have a defined benefit pension plan.

The Machinists Union, and the IAM National Pension Fund that manages nearly $10 billion in assets, is making it clear that we are on the side of working Americans.

“More than 44 million American workers faithfully contributed part of their paychecks every week into U.S. pension funds based on the promise that they would have a measure of financial security at the end of long, hard and often dangerous careers,” reads the ad. “Those pension funds are now being targeted by the same interest groups whose actions ravaged the nation’s economy and drained trillions from home equity and 401(k) savings accounts while using massive taxpayer bailout funds to pad executive bonuses.

“The latest attempt by bankers, bondholders and lawmakers to break into American workers’ pension funds represents an attempted robbery of epic proportions.”

“The IAM opposes any proposal that breaks America’s promise of a pension to those who have sacrificed wages in order to ensure a secure retirement for themselves and their families,” said IAM International President Tom Buffenbarger.

“We want the American people to realize that the issue of pensions is not a union issue – it’s an American issue,” said IAM General Secretary-Treasurer Robert Roach, Jr. “There are 44 million pension holders in the U.S., not all of those are union members. The IAM will continue to lead the fight in shedding light on this important issue and in defending workers’ pensions.”

A copy of the full-page IAM ad is available here.