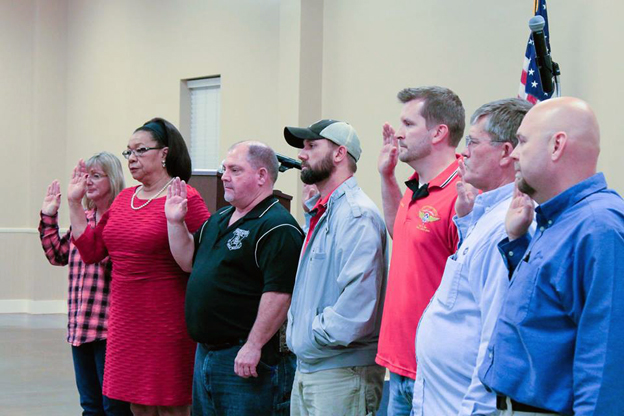 Clementine “Tina” Jenkins, second from left, is sworn in to her new role as president of IAM Local 2003. Jenkins is the first woman ever elected to the top job at the local, which represents more than 4,500 aircraft maintenance workers in Fort Rucker, AL.

Members of IAM Local 2003 made history by electing Clementine “Tina” Jenkins as its first female president in the 60-year history of the Fort Rucker, AL local.

After over three decades as a union member, Jenkins says she is ready to lead Local 2003 into the future. Representing over 4,500 aircraft maintenance workers employed by L-3 Communications is no easy task, but Jenkins says she is up for the challenge.

“One of the things I would like to accomplish is bringing more solidarity and unity to our local,” said Jenkins. “We have a very diverse membership when it comes to ages, and we can use that to our advantage with the right training and attitude. I see great value in having a membership made up of different generations.”

Jenkins started her career in a non-bargaining unit job, but after a few years of processing pension paperwork for retiring union members, she asked her supervisor what her pension would be when she retired. After being told only bargaining unit employees get a pension, she began to realize that there was strength in numbers and huge benefits to being in the IAM. Shortly after, Jenkins transferred jobs to get into the union.

Understanding the power of bargaining, coupled with the tragic loss of her teenage son, Jenkins was inspired to stay more involved in her union, running and being elected to the Grievance and Negotiations Committee in 2005.

“I wanted, and needed, to be part of something bigger,” said Jenkins. “I knew the contract well, so I was sure that I could be some help.”

Jenkins looks forward to representing the membership of Local 2003 and showing the public the benefits of having a strong union in the community.