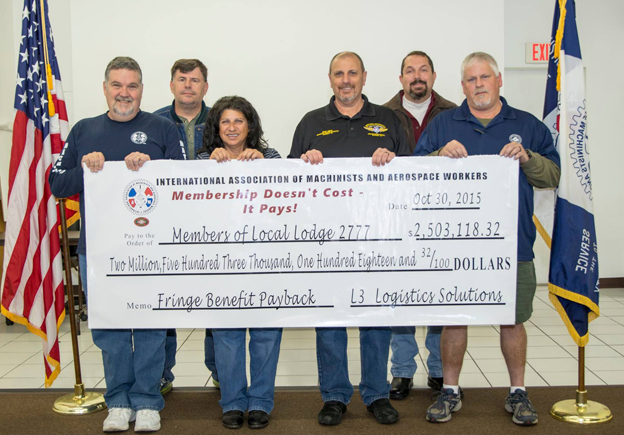 In a perfect example of why an IAM contract is so valuable, more than 200 workers for L3 Communications at Whiting Field Naval Air Station near Pensacola, FL won a grievance settlement that will result in an average payout of over $11,500 for each member.

Thanks to language negotiated into the agreement with L3, any cost savings in health and welfare contributions by the company must be passed on to the employees. In 2013 and 2014 no money was paid out, so Local 2777 Chief Steward and Grievance Committee Member Charles Pate filed a policy grievance on behalf of the members. Due to the complexity of the formulas in the agreement, they realized they would need help.

With valuable assistance from IAM economists in the Strategic Resources Department, the department’s Assistant Director David White and District 75 Business Representative Brad Smith, Pate pored over the mass of information.

Among the list of considerations were employer contributions towards group health insurance, life insurances, short-term disability insurance and a variety of other contributions. Working together, the team was able to determine the actual costs of such fringe benefits and submitted a grievance settlement for the two years in question.

“There were 210 employees in 2013 and 214 in 2014,” said Smith. “Whoever worked there under the IAM contract during those years got a payout, even people who had quit or retired were paid for the time they were there.”

“This could only happen with a union contract,” said IAM Southern Territory General Vice President Mark Blondin. “Usually when a company promises a dollar amount, but finds ways to save, they pocket the money. This time the money goes to the members, who earned it. I commend the fantastic job that Chief Steward Pate, Business Representative Smith and David White did for our members. I’m sure no one under this contract will ever say it costs to be in the union.”