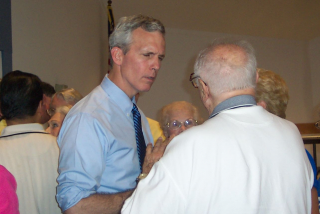 Winning the Governor’s Office is the first step towards more effective job creation, more secure retirement benefits, less expensive health care premiums and more expansive education opportunities for our members and their children.  That’s why we are focusing our attention on a dozen gubernatorial races across the country.

Four questions of important issues for IAM Members and working families and the Gubernatorial Candidates response appear below.

Jobs:
• Jim Davis has sided with working families and organized labor on priorities such as Davis-Bacon standards, collective bargaining, outsourcing and the minimum wage. He received a 93% Rating from National AFL-CIO in 2005.

• Davis has co-sponsored the Employee Free Choice Act, supported a vote to increase the minimum wage to $7.25 an hour and voted against the Central American Free Trade Agreement.

Medicare / Medicaid:
• Jim Davis has voted against privatization of Medicare. In 2003, he voted to reject a provision that required, beginning in 2010, the traditional Medicare program to compete against private plans to offer doctor and hospital coverage

• Davis has also said he opposes Gov. Bush’s proposal to privatize Medicaid, which he says would attempt to balance the Medicaid budget on the backs of people who depend on the state’s health insurance program to stay out of hospitals.