Forty-Eight Years Ago, a Machinist Took One Giant Leap 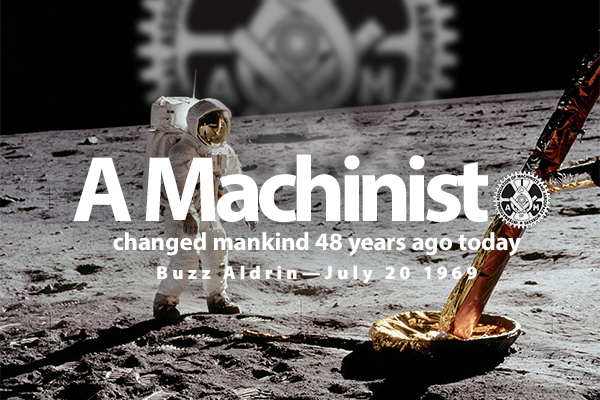 One of humankind’s greatest achievements, the Apollo 11 mission began on July 16, 1969, with the liftoff of a Saturn V rocket from NASA’s Kennedy Space Center. It culminated with Neil Armstrong and IAM member Buzz Aldrin taking those historic first steps on the moon.

The July 20, 1969 lunar landing was the achievement of a goal set eight years earlier by President John F. Kennedy, who challenged our nation to put a man on the moon before the end of the decade.

Reflecting on his journey, Aldrin noted that as he prepared to exit the lunar module, it was important to remember even small details.

“I watched out the window to see Neil go down the ladder,” he said. “When it was my turn to back out, I remember the check list said to reach back carefully and close the hatch, being careful not to lock it.”

As Aldrin said that on the moon, Armstrong laughed, “particularly good thought!”