Four Decades at the Table 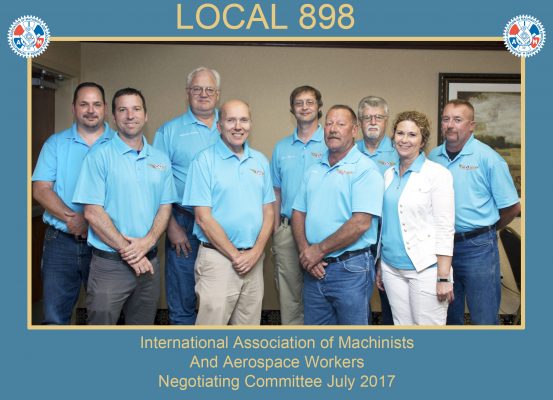 It was the last year of the Vietnam War. Gas was 38 cents a gallon. The Watergate scandal was in full swing and the song Bad, Bad Leroy Brown was dominating the radio. It was 1973. And while all of this was happening throughout the country, the Machinists were putting in place a first contract at Vance Air Force Base in Enid, OK. Fast forward about 44 years and that contract is still delivering to this day.

“Whether it’s in 1973 or in 2017, our message remains the same. A voice on the job, good wages, strong pensions, defined work rules…these are still the dominating forces of a Machinist contract. And every person in the IAM should be proud that we have been able to deliver that product for more than four decades at Vance AFB. That is exactly why we use the phrase in the South, ‘This is Why I Am Union.’ We are honored to be able to take care of our members with a great Union contract,” said Southern Territory General Vice President Mark A. Blondin.

The contract covers about 260 IAM Members who work for ASRC Communications, Ltd. and InDyne, Inc., doing the work that keeps the base up and running. Ultimately helping to facilitate our military Brothers and Sisters in the field.

“This contract covers workers providing a service to the U.S. Military. They are ‘Base Operations’ which run the gamut from Firefighters to Custodial Workers. They do it all at Vance AFB,” said Southern Territory Grand Lodge Representative Valerie Rodriguez. “We came to the table to meet the needs and desires of this membership for the next three years, exactly what we’ve done for the last four decades. It’s important to build on this contract to help provide our members a piece of the American Dream.”

The men and women gathered at the bargaining table with the companies weren’t asking for that much, just a fair contract. Specifically, their requests were leaning more pensions than wages. And since many at the table on both sides have been here before, everyone seemed to understand the importance of a secure retirement for these folks.

President and Directing Business Representative of District Lodge 171 Rick Boardman is one who has taken a seat at this table many times and has a good relationship with all the players. “You know, the Contractor said to me ‘we are in this with you. We believe in the pension and our workers having that pension,’ said Boardman, noting why that is the case. “It’s because after the research they saw, they knew the IAM Pension was the way to go. They saw the value of the pension, that it is a top performer. And they know that they can depend on what we put across the table because we have been here so many times before.”

The value of a pension becomes even more significant after realizing that you are changing the future for the men and women who hold Machinists’ cards. Over the three year contract, the increases amount to about 30 cents per year. But the big pictures tell the full story of what that means.

“It’s a huge amount of money. To be exact, at the end of the three years, it’s an extra $484.74 per month for each member. That’s something you can’t explain in dollars and cents. That’s a game changer for many retirees,” said Ben Moody, Organizer and Business Representative for District Lodge 171.

It’s become a sort of mantra for Blondin and his team in the South. The IAM Pension is always a win for workers.

“Think about what that means for a member, who like these Machinists, have spent nearly one-third of their life, if not more, on the job,” explained Blondin. “That is money that could be the difference between a retirement lifestyle of just getting by versus enjoying those Golden Years. In 1973 or 2017, that’s just not something you can put a price on.”