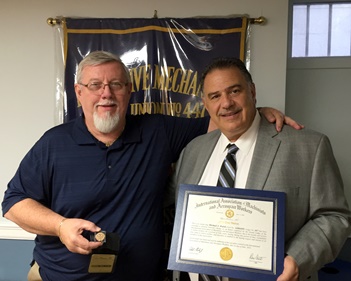 Mike Walsh will tell you he’s a very fortunate man.

“I always told everyone that I was blessed,” says Walsh.

Walsh recently celebrated 50 years as IAM member, a journey that began in 1966 as a mechanic for a truck and trailer dealership in Philadelphia. He would go on to work as a maintenance welder at Crown, Cork and Seal, then at the fleet maintenance garage at Acme Markets.

He held an IAM union card at every stop.

“I went to work my first day in an IAM union job, and had a good union job my whole life,” said Walsh.

“I was fortunate to be mentored by a former Directing Business Representative: John Scarfi,” said Walsh. “Jimmy [Conigliaro] and I both came up through the ranks together under John, and we developed a lasting respect for one another. He’s a true brother and friend in every sense of the word.”

Conigliaro was on hand to present Walsh with his 50-year pin and certificate.

“I consider this an honor and a privilege,” said Conigliaro. “Mike is a real pro, a true Journeyman Machinist and a trade unionist to the core. I value the brother and sisterhood of the labor movement, and I’ve learned that along the way sometimes you make a true friend. Mike Walsh is a true friend, confidant, valued assistant and my union brother for a lifetime. It gave me great pride to present him with his 50-year award on behalf of the IAM, at this truly momentous occasion. Countless men, and women live better lives today because of the work he’s done.”