Preparations are in full swing for the 38th IAM Grand Lodge Convention in Toronto, ON, where IAM staff members are working alongside union electricians, riggers and stage hands to turn the Toronto Convention Center into North America’s largest union hall.

Nearly 2,000 delegates, speakers, staff and and guests will be in attendance on September 9, when IAM President Tom Buffenbarger gavels the Convention to order and tasks delegates with the duty of charting the IAM’s course for the next four years. 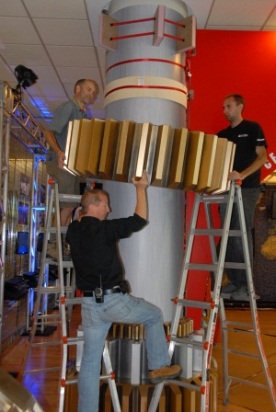 “It is the IAM’s elected delegates who hold perhaps the greatest position of responsibility in this union,” said Buffenbarger. “They alone can make changes to the IAM Constitution and they ensure this union remains responsive and directly answerable to the membership.”

IAM members across North America can follow events at the Convention in real time via streaming video at http://www.ustream.tv/channel/iam-38th-grand-lodge-convention. Daily updates of convention happenings will also be published and available at www.goiam.org. The daily convention updates will take the place of iMail for the duration of the Convention.

The 2012 IAM Grand Lodge Convention will unfold against a backdrop of events that are dramatically reshaping the world of work. Rampant unemployment, a catastrophic global recession, destructive trade agreements and a fresh assault on collective bargaining rights in the United States will give delegates much to consider before the convention concludes.

“It is right and fitting that the theme of this year’s convention is “Hope For All Who Toil,” said Buffenbarger. “Taken from the Canadian national anthem, that singular phrase captures our purpose as a labor organization and the larger aspirations of workers everywhere. While this convention will focus on our members and their jobs across North America, we are just as committed to the rights of workers in Asia, Africa and China.”