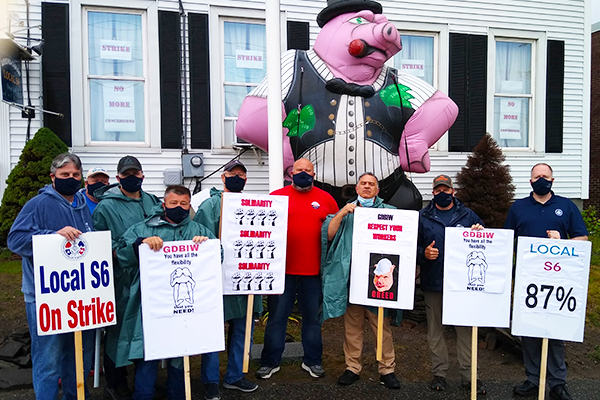 More than 4,300 members are entering their second week on the picket line, fighting for a contract that doesn’t expand non-union subcontracting or attack seniority provisions. Local S6 members overwhelmingly rejected the company’s so-called “last, best and final offer” on June 21.

“Our members build the best naval vessels on the planet, and BIW proudly proclaims it,” said Conigliaro. “The time for this company to start treating the workers with the same respect that ‘the best’ deserve has passed. We will not allow outside contractors to take over. This membership has worked too hard and given everything they have to this company and our servicemen and women. The proof is in the results, and this entire membership is unified and informed. I commend our members’ resolve in fighting for the contract they deserve and have earned as the best in the world.”

After gathering support from the Maine congressional delegation, IAM International President Robert Martinez Jr. also appealed to President Trump, asking the White House to urge BIW to “put aside their misguided proposals to risk mission success by subcontracting our work to under-skilled contractors.”

The IAM has not received a response from the administration, but both presumptive Democratic nominee Joe Biden and Democratic National Committee Chair Tom Perez have issued strong statements in support of Local S6 members.

Martinez also exchanged letters with the CEO of General Dynamics, the parent company of BIW, asking the company’s top leader to work with the IAM to “resolve the issues that created this work stoppage and preserve the integrity and future of the highly skilled workforce at BIW.”

“Our thanks go out to communities and unions across the state for their continued support,” said IAM Local S6 President Chris Wiers. “I would like to extend my personal thanks and welcome to GVP Conigliaro. The support from the Eastern Territory and the IAM has been invaluable.”