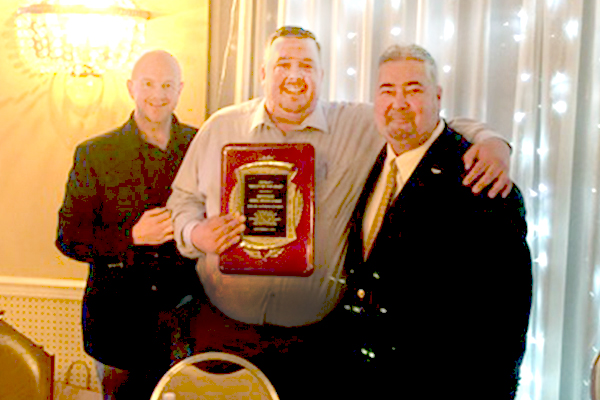 Since his initiation into West Wyoming, PA IAM Local 1602 in 1993, Mike Hiedcavage has fought to protect the hard earned benefits of his fellow union brothers and sisters. This year, he was recognized as District 1 “Man of the Year.”

“Mike is a union man’s union man,” said District 1 Directing Business Representative Tony Armideo. “I wish we had 50 more like him. Shop stewards and local lodge leadership are the very backbone of the IAM and are the first interaction new members have with their union.”

Hiedcavage previously served on the local’s organizing and shop committees, and consistently leads volunteer efforts in the union. He was elected chief steward and local vice president before being elected Local 1602 President in 2016.

“I was glad to have been there when Mike Hiedcavage received his award,” said IAM International President Bob Martinez. “His dedication to this union is truly commendable and his voice is recognized and respected by his members.”

“Brother Hiedcavage is the ideal example of the IAM motto ‘Justice on the Job, Service to the Community,’” said Eastern Territory General Vice President Jimmy Conigliaro Sr. “Selflessly donating the time, energy and effort into providing a voice for his brothers and sisters on the shop floor, working to organize new members and advancing the cause of organized labor. Special thanks to DBR Tony Armideo, ADBR Bill McIntosh and his staff for their efforts to recognize, and honor those who are on the front lines, working hard for our members.”