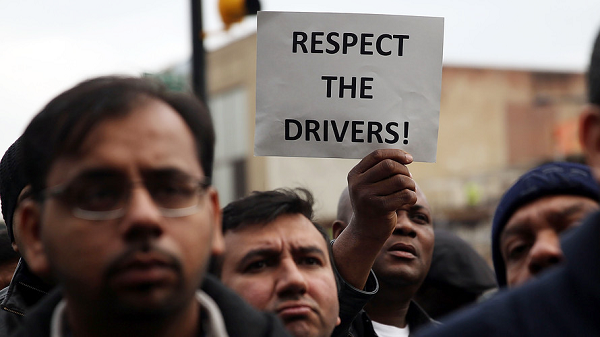 Members of the Independent Drivers Guild, an IAM affiliate, got one step closer to getting permanent restroom facilities at New York’s John F. Kennedy International Airport.

Porta-Potties have been installed at JFK. The Independent Drivers Guild, IAM affiliate, has been urging the Port Authority to add restroom facilities in the lot where Uber and Lyft drivers wait to pick up airport passengers. Before the Porta-Potties, the only place to go to the bathroom was in the parking lot bushes.

And one more pic with some of the members of the @drivingguild who have been leading the fight for a restroom pic.twitter.com/3cAIT2VG2G

“No workers should have to suffer years without a restroom facility,” E-hail Driver Michele Dottin told NBC 4 New York. “This step is a testament to the power of drivers coming together with one voice to demand action.”

“The lack of clean, accessible bathrooms for drivers has been a problem for too long. The atrocious situation at JFK airport must be corrected,” said Independent Drivers Guild founder Jim Conigliaro, Jr. “Drivers have been bringing this up to the authorities and rideshare companies for years with no progress – but with the power of the Guild we intend to win this basic necessity.”

The ultimate goal is to have permanent bathroom facilities, but this latest action is another victory for the For-Hire Vehicle Workers represented by the IAM’s Independent Drivers Guild.

The Independent Drivers Guild is a Machinists Union affiliate (IAM-District 15) that represents over 45,000 For-Hire Vehicle drivers in New York City. The IDG is the first nonprofit labor organization to negotiate a seat at the table with ride share company and the first to offer crucial new protections and essential benefits while building worker power.