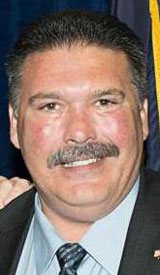 Hough initiated into Valparaiso, IN Local 1227 as a CNC Lathe Operator at Union Electric Steel Corp. in 1990, where he was eventually elected President of his local. He would go on to serve in a variety of positions at District 90, including Organizer, Business Representative, Vice President, President and Assistant Directing Business Representative. Hough is the current President of the Indiana State Council of Machinists and a Vice President for the Indiana State AFL-CIO. He was elected a delegate to the IAM Grand Lodge Convention in 1996, 2000, 2004 and 2012.