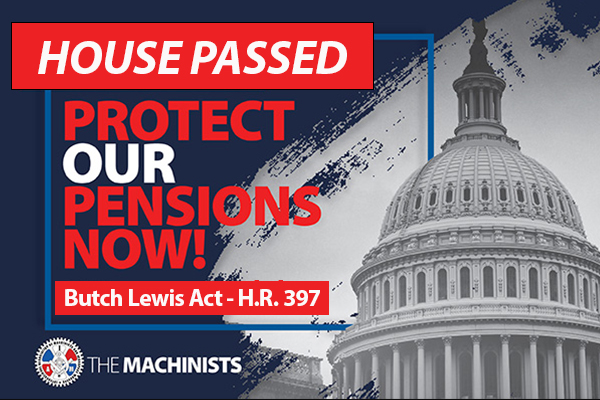 The House this week passed a bipartisan bill intended to stabilize multiemployer pension plans, advancing the legislation for Senate consideration.

House members voted 264-169 on the Rehabilitation for Multiemployer Pensions Act of 2019 (H.R. 397), better known as the Butch Lewis Act. Twenty-nine House Republicans crossed the aisle to join Democrats to vote in favor of the bill introduced by Rep. Richard Neal (D-Mass.). The IAM and other labor unions are urging Senate passage of the bill, which would offer federally subsidized loans to multiemployer plans in danger of becoming insolvent.

Thank you to all the @MachinistsUnion members who called on their member of Congress to protect the EARNED retirements of working Americans.

We were proud to fight alongside @RepRichardNeal to pass the #ButchLewisAct in the House. Now the Senate must do its job, too!

The legislation would also maintain the health of well-funded multiemployer plans and adequately fund the Pension Benefit Guaranty Corporation (PBGC), without making any cuts to the earned benefits of current or future retirees. Plans would invest the money from these loans and use the investment earnings to pay retiree benefits and improve the plan’s financial health.

The House passage of the Butch Lewis Act comes just days after the IAM and other labor unions on July 10 held a rally on Capitol Hill, urging House lawmakers to act on the legislation.